The player plays as a chikan (a perverted man who frequently fondles women) in crowded subway trains. A young woman named Aoi has the player arrested for molesting her. Afterwards, the player plans to exact revenge by molesting and raping her entire family. His first victim is Manaka, Aoi's younger sister; he rapes her in a public bathroom. His next target is Yuko, the mother of Aoi and Manaka, whom he rapes in the park. Aoi is the main character's third target, the woman who had turned him in to the police. He rapes her in a hotel after she is tied up. Afterwards, he brings out Manaka and Yuko. Yuko pleads with the main character to take her instead but her pleas fall short and the main character decides to make all three his sexual slaves.

After this, the player gets to have sex with them whenever and wherever they choose. 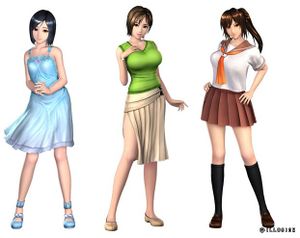 The object of the game is to "break" the three girls; that is to say, to force the girls to enjoy your molesting them rather than resist it. After completing the storyline, there are five modes of gameplay. Some of the gameplay modes are locked and can be unlocked by achieving talismans for various skills under each girl's picture. The game is open ended with two exceptions: if the player impregnates one of the girls (Black ending) or the player gets killed by Aoi before she has been broken (Red ending.) If the player impregnates one of the girls and decides to keep the child, the main character gets thrown into an oncoming train after a certain number of days thereafter. The other ending is obtained if one or more characters apart from Aoi are in the 'fertilized' stage, Aoi hasn't been broken and the player initiates Cowgirl position with her, triggering her to stab the player repetitively. She also seen to laugh manically and continue to mutilate him after she could not pull out the players penis. Rapelay was the first game offered by Illusion that allowed the player to have sex with more than one female at a time.

The main character says a prayer, and a gust of wind blows up the skirt of the girl.

The player is restricted to one sexual position, but four males have sex with the girl. The level restrictions for this mode include locations with small space.

Neko-Kappa mode allows the player to have one or two girls tied up in bondage and perform sexual acts on them by scrolling via the wheel of the mouse. This mode is not playable, and can be only viewed in the Botuplay Extra CD.

These images were released during the development of the game.

In 2009, the company discontinued supporting RapeLay due to controversy surrounding it in the United States. In 2008, Amazon.com came under fire for offering it on their website - as it turns out, a third party reseller added a page for the game. Amazon immediately distanced themselves from the reseller. It is worth noting that Illusion Soft games are not sold outside of Japan. A flurry of negative press articles and protests soon followed.[citation needed] The game was released legally in Japan in 2006.