Raticate(ラッタ, Ratta in original Japanese language versions) is one of the 493 fictional species of Pokémon in the Pokémon franchise (a series of video games, anime, manga, trading cards and other media created by Satoshi Tajiri).

The name Raticate seems to be a part of the word "eradicate", which makes sense considering its fearsome nature.

In the original Red and Blue versions of Pokémon, the Pokédex classified Raticate as a Rat Pokémon, as seen on Raticate's Base Set card (see picture). However, for unknown reasons, Raticate was (re)classified as a Mouse Pokémon in Ruby, Sapphire, FireRed, LeafGreen and Emerald. This could have been to further affiliate it with other such rodent Pokémon as Raichu and Sandslash (which are also classified as Mouse Pokémon), or simply as an issue of inconsistency; the Japanese word used, nezumi, refers to both rats and mice.

Raticate resembles a large rodent, and may be based on the coypu. It has light brown fur, a long tail, and webbed hind feet with 3 toes each. In Pokémon Diamond and Pearl, like Rattata, the females' whiskers are dramatically smaller.

It is a nimble predatory Pokémon, and the majority of its features are adapted for this purpose. Its whiskers are used for balance and it slows down if they are cut off. Its webbed feet act as flippers, so it can swim in rivers as it hunts.

If attacked, Raticate stands up on its hind legs, bares its tough fangs and shrieks at its enemy in an attempt at intimidation. The fangs are its main weapon, and it will gouge anything with them. As with some real rodents, Raticate’s fangs grow steadily, and it must pare them down by gnawing on rocks, logs, and even houses. It may even topple concrete buildings with its constant chewing.

Raticate can be found in several locations within Kanto and Johto, and can also be obtained by evolving the abundant Rattata in those regions. Players can also snag a Shadow Raticate in Pokémon XD: Gale of Darkness from Chaser Furgy on Citadark Isle.

A Raticate was briefly a member of Ash Ketchum’s team when he traded his Butterfree for it, but, dissatisfied with the trade, he soon asked the other trainer to trade back. Raticate have had minor roles in several episodes, and Butch and Cassidy of Team Rocket also have a Raticate. It was their first Pokémon, assigned to them as part of their training. Butch and Cassidy's Raticate plays very much the same role as Meowth of their rivals Jesse and James owing to the fact that every paired up Team Rocket member has an assigned Pokémon. Raticate is seen in episode 42 (Showdown at Dark City) as one of the Kaz Gym's Pokémon.

In the Pokémon Adventures manga, Yellow’s first Pokémon, a Rattata named Ratty, evolved unexpectedly after exhaustive training under Blue’s tutelage. Yellow, not familiar with the concept of Pokémon evolution, was taken completely by surprise, and cried herself to sleep. In the morning, however, she decided that whatever Ratty looked like, she still loved her friend. 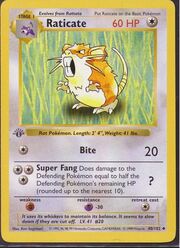 There have been quite a few Raticate cards in the Pokémon Trading Card Game, in the Base Set (included in Base Set 2 and the Legendary Collection), Team Rocket (as Dark Raticate), Gym Heroes (as Lt. Surge’s Raticate), Gym Challenge (as Lt. Surge’s Raticate), Southern Islands, Skyridge, EX FireRed & LeafGreen, and EX Team Rocket Returns (again as Dark Raticate, now a Darkness-type Pokémon). The Base Set Raticate includes its signature Super Fang attack which cuts the defending Pokémon’s HP in half.