Rattata (コラッタ, Koratta) is a portmanteau of “rat” and “attack”. Its name in the English beta version of Red/Blue was “Rattatak”. This makes sense because it is a rapidly attacking rat-like Pokémon. As far as the original Japanese name is concerned, one convention of the Japanese language is that the prefix “ko-” (子, meaning "child") is added to the name of some animals to create the name for its offspring. “Koratta” would then mean “baby Ratta”, the adult form into which this Pokémon eventually evolves.

Rattata looks a lot like the common mouse or rat. It is a quadruped with purple fur (cream on its underbelly area), red eyes, two thick whiskers and a curled tail. In Pokémon Diamond and Pearl, the female has much shorter whiskers.

One of the most prolific Pokémon in the world, Rattata can make its nest almost everywhere and dash; and it will, too, if the area provides adequate food. Food is another area Rattata is not particular about: it is an omnivore in the broadest sense of the word, meaning it will eat anything it can scavenge. After it settles down somewhere, Rattata will multiply very rapidly, even to the point of infestation. It is said that seeing just one Rattata guarantees the existence of at least 40 more in the vicinity. This is probably right, as Rattata is the second most common Kanto Pokémon (the most common being Pidgey). They get along well with Pidgey.

Since Rattata is small and fairly low in the food chain, it keeps itself constantly alert for danger. It is jittery, constantly scurrying around. Even when sleeping, Rattata keeps moving its ears, listening for signs of trouble. If forced to defend itself, Rattata displays impressive vitality and resilience. It moves quickly and bites the foe with its fangs, which are very sharp and long. Like in many real world rodents, Rattata’s fangs grow continuously during its lifetime, so it whittles them down to a comfortable size by gnawing on hard objects. It enjoys preying on the snacks of unwary Pokémon Trainers.

Rattata is, perhaps, the single most common (Next to magikarp, zubat, and Pidgey ) Pokémon found in the Kanto and Johto regions, encountered frequently in many of locations. For many trainers, Rattata is one of the first that they catch and train.

Rattata has high speed and a decent attack stat, but the rest of its attributes are low. It has been given the potential to learn many and powerful elemental attacks, but its low special attack stat renders them fairly useless. Players usually use Rattata’s evolved form, Raticate, if possible. Rattatas enjoy foods like walnuts, chestnuts, cheese, and milk. Most people underestimate Rattata, however, if it has a high level, knows good moves, and it's stats have been slightly raised by items like Calcium, Protein, Zinc, etc., it can be a fairly useful Pokémon.

Rattata has made a few appearances in the Pokémon anime, usually as an incidental, background Pokémon. It was one of the first Pokémon Ash consulted his Pokédex about, and recurring character Casey catches one in her first appearance.

In the first episode, a Rattata appears and tries to steal Ash's food. It runs away when Ash tries to catch it.

One again appears in the second Pokémon episode. When Team Rocket attacks the Pokémon Center, Ash grabs a Pokeball and out came a level 100 shiny Rattata. This was the first appearance of a shiny Pokémon in the anime.

In the episode "Following a Maiden's Voyage!" a Rattata was one of the many Pokémon rescued by Dawn and Piplup from a group of Ariados

In the Pokémon Adventures manga, Red helps Yellow catch a Rattata, Ratty, one of the few Pokémon she keeps and uses. Later, during her training with Blue, she is dismayed by Ratty’s unexpected evolution. 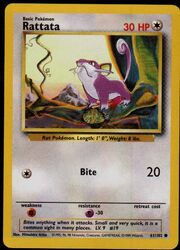