Rayne, sometimes referred to as "Agent BloodRayne") is the protagonist of the BloodRayne franchise. 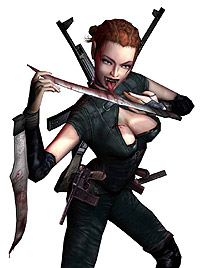 It was implied that Rayne was originally going to be Svetlana Lupescu, a Dhampir from a previous game from Terminal Reality, Nocturne. Svetlana is a dhampir that fights supernatural creatures, using twin blades similar to those used by Rayne and works for an organization called Spookhouse, whose concept is similar to the Brimstone Society. Early screenshots for Bloodrayne showed the title character dressed almost identically to Svetlana, suggesting that the game was originally planned as a sequel to Nocturne.

The final version of Rayne may have been partially inspired by the character of Durham Red from the comic book 2000 AD, although that has been denied multiple times by the TRI representatives when discussed on bloodrayne.co.uk forums. The Harris'/Anarchy Comics' Vampi and Chaos Comics' Chastity may have had a degree of influence on Rayne as well

Rayne is a bloodthirsty American Dhampir, born c.1915-1916. Her mother was raped by her vampire father, Kagan. Kagan later murdered her mother's entire family so that the only family member Rayne could turn to is him. This wasn't cruelty, but a policy for all of the Dhampir he "created", possibly so that humans wouldn't revolt and use the Vampire/Dhampir weakness of the sun, holy items and water against them.

Circa 1932, she spent her teenage years trying to hunt down and kill her father, to get revenge for her family. It was a search that led her to Europe, where she committed a series of murders of Vampires along the way before being apprehended. Claiming that her victims had been vampires, she was disbelieved by the authorities, but quickly managed to escape from them and continue her hunt.

She was recruited into the mysterious Brimstone Society via an invitation. The Brimstone Society sent her on missions to eliminate supernatural threats to the world. One of these missions required her to use her vampiric powers against the Nazis, who were on the verge of using magical artifacts to bring Hitler to power. Rayne also learned of a plan to use demonic parasites called Daemites against the enemies of the Nazis, after they had been tested on prisoners. The background to the story is influenced by the existence of various historically real Nazi occult groups such as the Thule society.

As a damphir, Rayne has a variety of superhuman and supernatural abilities:

Rayne is beautiful and highly sexually appealing. She has red hair and green eyes. Her first outfit was a revealing, formfitting black and red leather corset-like top and skin-tight black, red striped leatherpants, with sewn in boots. Her second costume is an updated variation of her original outfit, though shinier, similar to vinyl, but she also wears a variety of different attires, all of which are very revealing, going so far as to expose her gluteal cleft. In both of the games she is always seen in 6+ inch metal stiletto spike heels.

Rayne was portrayed by Kristanna Loken in the movie Bloodrayne and by Natassia Malthe in BloodRayne II: Deliverance.

Rayne is the first videogame character that appeared in the "Playboy Magazine", in the October 2004 U.S. edition as part of an article entitled "Gaming Grows Up".

She has also made appearance in MTV in which a music video portrayed her performing Evanescence's song "Everybody's Fool". In the music video, Rayne swayed and sung as various enemies from the game were shown playing the instruments.