Reach for the Stars

Reach for the Stars is a science fiction strategy video game. It is the earliest known commercially published example of the 4X games (Explore, Expand, Exploit, Exterminate) genre. It was written by Roger Keating and Ian Trout of SSG of Australia and published in 1983 for the Commodore 64 and then the Apple II in 1985. Version 3 added a DOS port, though it did not share all of the features of the other platforms. The game was eventually ported to pre-Mac OS X versions of the Macintosh operating system, such as System 6. It was also ported to the Amiga and Apple IIGS, though which version was ported is not known.

The player commands a home star in the galaxy, and then expands to form an interstellar empire by colonizing far-off worlds, building powerful starships, and researching new technologies.

Graphics are minimal, yet the tactical and strategic elements provide countless rich combinations for colony development and interstellar warfare. The software's AI also offered a challenging opponent in single-player games. It is not uncommon for a Reach for the Stars game to take over twelve hours to complete in single-player mode and 24 hours with multiple players.

In Versions 1 to 3 the player starts off with one planet that has Level 1 technology and a middle level environment. Three types of ships are available:

Starting players have limited funds, and have to decide where to invest the funds (technology upgrades, ships,or environmental upgrades). Upgrading a world's planetary environment, for example, means that its population grows more quickly, improving production; this is a mixed blessing, however, because if the population grows beyond the maximum allowed for that planet, the costs to feed the population skyrocket. Building a lot of ships early can win a player the game, if the player finds his enemies' home planets before they manage to upgrade their military technology; on the other hand, it can lead to a loss if the player's opponents upgrade first and attack with superior ships.

Because the game evolves along so many different axes of possibility, the game offers tremendous replay value. It is quite possible to save a game on the first turn, and have it play out differently each time it was restored.

A review in Computer Gaming World found the game quite user-friendly and enjoyable, with the single flaw of a lack of notification of natural disasters, which couldn't fit onto the disk space available. The computer AI and customization of each game were particular highlights of the review.[1] 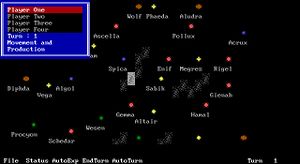