Red Steel is the name of a recently released Wii launch title. It is the first Wii (Revolution at the time of the announcement) game to be officially announced, on April 7 through a leak of a preview in the pages of an upcoming Game Informer magazine. It was developed and published by Ubisoft.

Tokai, the antagonist of the game and leader of the Shibuya Giris, attempts to take control of six Yakuza clans, including the Financial Clan, who controls major banks. While Tokai persuades the clans, it is Scott Monroe's (the protagonist) job to convince them to join him and fight Tokai.

At the same time, Monroe's fiancée, Miyu Sato, is kidnapped during what was supposed to be his first meeting with her father, Isao Sato. Sato is revealed to be the Oyabun (a Godfather of sorts) of one of the largest Yakuza families, and gives Scott the "Katana Giri" -a legendary weapon once used to punish dishonorable Godfathers and now a symbol of peace- to find his captured daughter.

Red Steel is a First Person Shooter, and thus follows many of the genre's conventions. It attempts to distinguish itself by allowing for combat with a Katana and Tanto (Japanese sword and short-sword), however these are not optional, and are limited to certain bosses and enemies, and only swords may be used in these battles. The majority of the game is played in traditional FPS style, with a recharging health system featured in games such as Call of Duty 2 and Halo 2. It utilizes all of the functionality provided by the Wii Remote, with aiming controlled by the controller, and several other functions, such as opening doors and reloading being mapped to certain gestures. It also uses the Wii Remote's internal speaker to deliver a secret objective to each player in multiplayer, however this functionality has been criticized because players can hear each other's speakers due to the proximity required to play split-screen multiplayer. 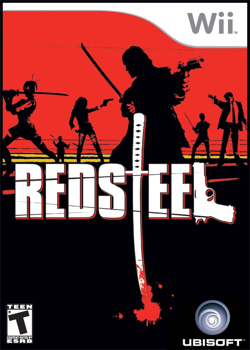 Red Steel has garnered mainly negative reviews from the press, being criticized for poor controls, various bugs and glitches, poor graphics, mediocre multiplayer and a terrible plot. Many believe that it failed to live up to the hype surrounding the game leading up to the launch of the Wii.