Inside the book[edit | edit source]

Since Resident Evil: Archives: Umbrella's Virus Uncovered is actually a translated edition of a similar book released in Japan, it's content is somewhat dated and vague. The book does not mention Resident Evil 4, nor does it try to clarify what content that is canon to the Resident Evil series. It is unclear which version of each title is considered canon (in the case of multiple re-releases), and it is also unclear whether events that took place in Resident Evil Outbreak/Outbreak: File 2 also happened.

In addition, due to the translation errors (or perhaps as a result of the often confusing point of views used in the games), many readers will be confused as to how the events happened. Sometimes, the book uses a first person point of view, giving the read insight into what he/she might be thinking; other times, the book uses a narration, giving the reader an overview of all events happening at the same time.

Perhaps the biggest complaint about the book is that it covers nothing beyond the events, characters and items in the game, creating an illusion that it's a player's guide while not offering a walkthrough. This is in direct contrast to Half-Life 2: Raising the Bar, a similar book that covered the development and design process of Half-Life 2, in addition to the events in the game itself. Nowhere was Resident Evil 1.5 mentioned, nor were there any discussions or coverage of the development transition that was faced by Resident Evil 0, even though there were graphical artwork and sketches that mentioned the transition from Nintendo 64 to the Nintendo GameCube. 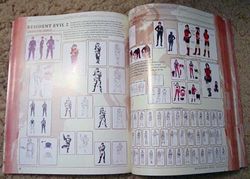