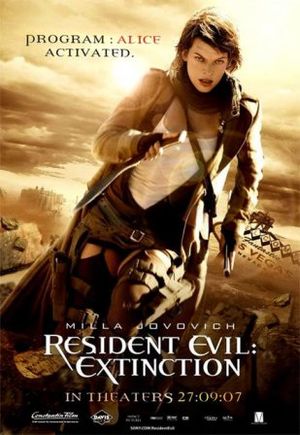 Following the events of the Raccoon City incident in Apocalypse, the T-Virus escaped containment despite the nuclear destruction of the city. Now spreading through the ground, the Umbrella Corporation was unable to contain it. The virus spread across the country, drying up the lakes, rivers, and continents while infecting the majority of the population. After five years, almost every living creature has become a zombie, and the world itself is on the verge of extinction. The Umbrella Corporation appears to be the only organized society of humans left in the world, its remnants forced to live underground in Hive-like constructs dispersed around the world.

Alice (Milla Jovovich), Umbrella's greatest bio organic weapon, is now alone in the desert wastelands of the remains of the United States after learning that the corporation has the ability to track her location via satellite. She has super-human strength and psionic abilities gained from her brief imprisonment by Umbrella. Umbrella considers re-capturing Alice a top priority because of her blood's ability to bond with the T-Virus. Dr. Sam Isaacs (Iain Glen) believes that he can develop a permanent cure to save what is left of humanity, as well as tame the zombies so as to create a viable workforce by using blood from the original Alice. Umbrella chief Albert Wesker (Jason O'Mara) orders Isaacs to create a cure without Alice, using clones created from her blood. Wesker refuses to authorize manpower to recover Alice until they are 100% sure where she is, due to the high risk involved in missions on the surface. The Alice clones endure tests within the re-created Spencer Mansion, The Hive, and Raccoon City Hospital locations, but none survive. The bodies of the failed Alices are dumped in a drainage ditch alongside Umbrella's fenced in desert compound, as hordes of zombies are gathered around the outside. Attempted cures derived from the cloned blood do not work, but Dr. Isaacs discovers that he can create a new strain of "super zombie" that can move fast, are unusually aggressive, and have even more strength and intelligence. Isaacs secretly begins creating a horde of these new superzombies, similar to the Resident Evil Gamecube Remake enemy known as 'Crimson Heads'.

Meanwhile, Claire Redfield's (Ali Larter) convoy, which includes fellow Raccoon survivors Carlos Olivera (Oded Fehr) and L.J. (Mike Epps), along with new survivors K-Mart (Spencer Locke), Mikey (Chris Egan), Chase (Linden Ashby) and Nurse Betty (Ashanti), search a small motel for supplies. L.J. is taken by surprise by a zombie and bitten, but does not tell Nurse Betty, who checks his other wounds. The next morning a flock of infected crows begin to attack the convoy. A reluctant Alice reappears and uses her telekinetic powers to incinerate the flock by covering the sky in flames from a nearby flamethrower. Despite Alice's help, Nurse Betty, Otto, and five others die in the attack.

Alice is introduced to Claire, and gives her a diary she found in a nearby town. The diary details radio transmissions that claim that there are living humans in Alaska, and that there is no infection or undead there. Alice and Carlos convince Claire that the convoy should make an attempt to reach Alaska before the rest of them are killed. Claire, unable to make such a big decision herself, puts it to a vote of the convoy. After the other survivors agree to try for Alaska, they realize that they need to be resupplied in order to make it. With no other alternative, the leaders of the group decide to search for supplies in Las Vegas. At the Umbrella corporation, with the help of a new artificial intelligence computer called the White Queen, they are able to pick up Alice's location based on the use of her psionic powers. Dr. Isaacs defies Wesker's direct orders and has a crate of his new "superzombies" transported to the convoy's destination. The convoy meets with the new zombies, and a battle between them ensues. Mikey and Chase are killed along with a large portion of the convoy in the fight, while L.J. turns into a zombie and bites Carlos before being shot. Once Umbrella sees Alice is in position, they attempt to "shut her down" and control her actions. She resists the attempt and destroys the CPU on Umbrella's tracking satellite, while continuing to come for Isaacs, getting to his location just as he slips away in a helicopter. A superzombie bites him just before it takes off. Alice decides not to shoot down the helicopter, instead convincing Claire and the others to steal it from Umbrella and use it to get to Alaska.

The remaining members of the convoy head towards the Umbrella facility, but find it surrounded by hundreds of zombies. Carlos' infection has gone beyond a cure, and he decides to sacrifice himself for the convoy. Alice and Carlos kiss before he departs; he drives a gasoline tanker truck to the entrance to the Umbrella lab and sets off a pack of dynamite, plowing a path through the zombies for Alice and Claire to drive through. All but Alice, who plans to exact her revenge on the Umbrella Corporation, depart on the helicopter, which is piloted by Claire.

Dr. Isaacs, who was arrested by Umbrella after his return from the failed mission to capture Alice, has been locked in his lab. Wesker orders Captain Slater (Matthew Marsden) to 'liquidate' Isaacs, but when they go to kill him they find him sitting in his lab injecting himself with masses of the Anti-Virus. Isaacs explains that the strand of the T-Virus that is carried by the superzombies is more potent due to it being mixed with Alice's blood, and therefore he needs much more Anti-Virus. However, for the first time we see the opposite effect of too much Anti-Virus as Isaacs starts to mutate. He is shot by Captain Slater, but has already mutated into the Tyrant. Isaacs goes on a rampage, killing all the employees in the facility. The White Queen manages to trap Isaacs in the lower levels and tells Alice that she must pass through there to create a cure for the infection, which only her blood can do.

Alice heads down, seeing a clone of herself still in a vegetative state. She examines it, but Isaacs interrupts, attacking Alice before fleeing when she stabs him with a kukri knife. The clone then awakens, but the shock of the sudden awakening seemingly kills her. Alice covers the clone in her coat and leaves after Isaacs. In the replica of the Spencer Mansion, a battle between Isaacs and Alice ensues, with both displaying use of telekinesis. When the fight is taken to a replica of the laser corridor from The Hive, Alice informs him that they are both to die there when the lasers activate. The lasers cut Isaacs into pieces in the same fashion as the character One in Resident Evil, but just as Alice is about to meet the same fate, the lasers dissipate. The clone of Alice is shown to be the one who turned off the lasers.

Meanwhile, in Tokyo, Japan, Wesker informs the rest of the Umbrella board that the North American branch has been lost, and he will now control further scientific experimentation from Japan. Using holographic technology, Alice makes an appearance at the meeting, saying that she and her friends are coming for them now. Standing beside the clone of herself, Alice looks onto the rows of pods containing the other clones, their numbers in the hundreds. As many clones begin to awaken, the film ends.