Resistance: Fall of Man is a First-person shooter game developed by Insomniac Games for the PlayStation 3.

Insomniac Games has released two sequels to Resistance on the PlayStation 3: Resistance 2 and Resistance 3.

Resistance: Fall of Man is a first-person shooter set in an alternate history. Many of its gameplay features stem from this, most notable of which is the weapons. Some weapons are based on real weapons circa the 1950s, while some weapons are futuristically altered in accordance with the game's storyline. Insomniac Games has combined its passion for creating exotic weapons and vehicles, such as those found in the Ratchet and Clank series, with its proprietary development engine and physics system to create unique human and Chimeran weaponry. Each weapon provides a unique play style and strategy. An example of this is found with the Auger (Chimeran). The primary fire for this weapon is simple rapid fire, but the bullets burrow through walls, actually coming out stronger on the other side, opening up a whole new level of strategy. The secondary fire creates a barrier that is resistant to all bullets but its own. In addition to the usual short- and long-range weapons, the game features several different types of grenades, with both historical and futuristic varieties. For example, one grenade, known as the Backlash grenade, is capable of creating a dome-shaped barrier, where the player can enter for cover. The barrier reflects shots from opposing Chimera. Some weapons are not available on the first play-through of the game but can be found at certain locations on replaying the game. 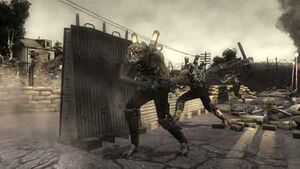 The game features melee attacks, and the motion sensing feature of the SIXAXIS controller is used for a number of things including shaking off enemies that grab onto the player, shaking off tags and flames in multiplayer, and quickly bringing up a map or leaderboard in a multiplayer match. The player also has access to turrets and a drivable jeep with a gun turret on certain levels. The game was also on Sony's list of titles to receive an online update to support the vibration feature of the DualShock 3 controller for Japan, North America, and Europe.

Similar to Ratchet and Clank, there are also skill points that can be earned throughout the single player game. These are awarded for certain actions that are hinted at by their titles; however, the specific details are not revealed until the skill point is actually earned. For example, one skill point, called "Tag, You're It" requires killing five enemies in 30 seconds with the Bullseye weapon. There are generic skill points that can be earned during any single level, and some that are specific to certain levels of the game. Each task is worth a different number of points which are used to unlock additional media for the game. There are many more skill points to be found in Resistance than in the Ratchet & Clank or Spyro series, which means the actions required to complete the points are much easier to do. Therefore, multiple skill points can be earned at once with little effort from the player. For example, one skill point, 'I Believe This is Yours', requires the player to kill all the Chimera in any level using only Chimeran weapons; in later levels, Chimeran weapons are more plentiful and more powerful than human weapons; in addition to the enemy AI guiding the Chimera towards the player, this skill point can be acquired with relative ease.

In addition, multiple Intel documents can be found scattered throughout each level. These give the player an insight into what has happened, is happening, and will happen.

Note: Zoom with the up and down D-pad buttons, the right button will immediately increase the zoom to max

Same as the Bullseye, except much more powerful, burrowing into the bodies of the target it hits. The projectiles are blue instead of red.

Standard Chimeran grenade. When thrown, hovers at chest height off the ground where it lands. It then explodes, launching spikes in all directions.

When thrown, releases a large cloud of flammable gas. Once the gas is fully released, it is ignited. If circle is held when thrown, the gas will release, but the combustion will not occur until much later, or when circle is released. Can also stick to enemies.

Note: if both L1 and R1 are depressed, the reapers will lock on to the nearest living targets on screen and track them while firing.

Creates a protective "bubble", which reflects any fire from Chimeran weapons directly back to their source, and allows any human weapons to travel through. Also, any chimera caught in it will receive damage, but will not drop dead on the spot.

The game takes place in 1951 of an alternate timeline.