Rhydon appears to be a cross between a rhinoceros and a dinosaur. It is a massive gray bipedal creature with clawed forepaws and hindfeet and a long tail. Rhydon's head has two horns: one is on its forehead, and another one at the end of its snout. The latter is bigger and seems to be styled after a drill. After the production of Pokémon Diamond/Pearl, it is revealed that the male Rhydon has a longer drill horn than the female.

Rhydon's brain is considerably more developed than that of its pre-evolved form Rhyhorn, which allows it to exhibit some signs of advanced intelligence, including the ability to stand upright and walk on two legs.

Rhydon is excellently equipped both in terms of both offense and defense. Its thick hide is capable of shrugging off even direct hits from a cannon and can withstand molten lava of 3,600 degrees Fahrenheit in temperature (close to 2,000 degrees Celsius). However, Rhydon's rugged skin also makes it insensitive, preventing it from realising when it is seriously hurt.

Offensively, Rhydon's powerful tail can topple buildings (compare with Charmeleon). However, its best weapon is its horn, which Rhydon can freely rotate like a drill. The horn drill's strength is such that it, too, can destroy buildings, bore holes through solid stone and even shatter uncut diamonds, which are among the hardest substances in the world. It is said that Rhydon's Takedown attack is like being run over by a tank.

As several Pokémon have a cultural basis in film and mythology, it is interesting to note that Rhydon bears a striking resemblance to the Korean movie monster Yongary.

Besides being the evolution of Rhyhorn (from which it evolves at level 42), Rhydon can also be found in some games. In Pokémon Red and Blue, Rhydon appears inside the Unknown Dungeon. In Pokémon Yellow it is additionally available through an in-game trade in Cinnabar Island. An in-game trade is also the way to acquire Rhydon in Pokémon Gold and Silver, only it takes place in Blackthorn City. In Pokémon Crystal Rhydon is also found in Victory Road. Finally, in Pokémon XD one could be snagged from Cipher Grand Master Greevil.

Rhydon has very high Attack, Defense and Hit Points, making it a powerful and durable Pokémon. Unfortunately, besides being very slow, its Special Defense is extremely low. This, combined with its Rock/Ground type combination which makes it quadruple weak against Grass and Water-type attacks, makes Rhydon much more fragile than it appears at first glance. Rhydon can have the ability Lightningrod, making it an effective user of said ability as Electric attacks have no effect on it.

Rhydon can learn many powerful physical attacks, many of which concern its horn. It has the distinction of learning naturally Mega Horn, the most powerful Bug-type attack, which can make it effective against Grass-type Pokémon. However, this is an extremely risky play seeing Rhydon's very poor speed means that the enemy Grass type may attack first, and defeat Rhydon before it even gets the chance to use Mega Horn. Attacks often preferred in Rhydon movesets include Ground and Rock-type techniques such as Earthquake, Rock Slide and Rock Blast. Double-Edge is also a good option, since Rhydon's Rock Head ability allows it to use this strong move without suffering recoil damage. Rhydon also has the potential to learn many special attacks, but its low relative stat does not make them particularly worthwhile. Although, the Elemental Punches and Elemental Fangs are worth using in the Diamond and Pearl games, due to the fact that those six moves count as physical attacks in those games.

Rhydon has an evolution in the new Pokémon game Pokémon Diamond and Pearl which is called Rhyperior. Stats-wise, Rhyperior is only slightly stronger than Rhydon, with fairly small increases across the board (probably because traditionally, Pokémon that evolve when traded are strong anyways, due to the fact that not all players have access to trade). However, this is balanced by Rhyperior's new ability Solid Rock (which replaces Rock Head), which lowers the damage done by super-effective moves. It also has a new signature attack, Rock Wrecker, a Rock-type version of Hyper Beam. Rhydon will only evolve into Rhyperior by being traded with an item called the Protector.

Rhydon has also been used by trainers: Blaine, the Cinnabar Island Gym Leader used one in his badge battle against Ash in episode #58 (Riddle Me This). Ash defeated the Rhydon with his Pikachu despite its type advantage by ordering Pikachu to "aim for the horn", which has spawned a minor Internet meme. Another one, on loan from Giovanni, was used by Team Rocket as acting Gym Leaders of the Viridian City Gym in episode #63 (Battle of the Badge). Rhydon appeared in episode 40 (Showdown at Dark City) under the ownership of one of the trainers at Kaz Gym; that was the Rhydon's debut episode. Finally, in episode #206 (Right on, Rhydon), a girl named Pietra managed to catch a very special Rhydon which knew the Surf skill (compare with the Surfing Pikachu) because her other Rock-type Pokémon could not build a tunnel that involved them coming into contact with water. However, in the RPG series, all Rhydons are capable of learning Surf from HM03. Brock's dad, Flint has a Rhydon, but it was just mentioned. Flint mostly had his Rhydon help him decorate the Pewter Gym's battlefield with rocks from mountaintops.

Rhydon debuts in the Red, Green & Blue chapter in its own round, Raging Rhydon, as a Koga's Pokémon that is forced to evolve by its trainer with a mysterious injection, being the first evolution showed in the manga.

Rhydon is later seen as one of Giovanni's Pokémon.

In Volume 9, Green captures a Rhydon outside the Viridian Gym. He uses it to defeat Chuck in Volume 13, as well as Oca in Volume 23. Near the end of the FireRed and LeafGreen saga, Green remarks on a footnote Giovanni included in his handbook: Rhydon possibly possessed a stronger form. This is a reference to Rhydon's new evolution, Rhyperior.

Earlier in the same volume, Gold encounters a wild Rhydon during his race with Whitney. The Rhydon in question was hunting down a Sudowoodo hiding from it, and kidnapped Whitney when she interfered with her Miltank. Gold tells Sudowoodo to stand up for itself and, with assistance from his billiards cue, helps Sudowoodo defeat the Rhydon. 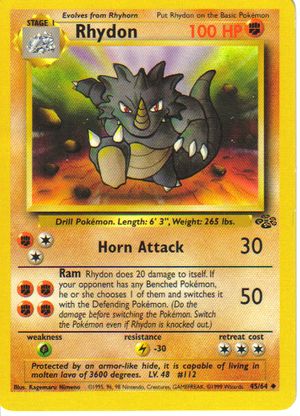 Rhydon, as seen in the Pokémon Trading Card Game

Rhydon has made many appearances in the card game, and all are stage 1 and Ground/Fighting type: