Rhyhorn (サイホーン, Saihōn, Sihorn in original Japanese language versions) is a fictional species in the Pokémon franchise. It is a Ground/Rock Pokémon, and among the original 150. Its appearance is based on a rhinoceros and it evolves into Rhydon.

Rhyhorn is a portmanteau of rhinoceros (which it resembles) and horn. The spelling is also influenced by the rock rhyolite.

Rhyhorn is a nocturnal omnivore.

Rhyhorn is among the ten least intelligent Pokémon, but it is also among the strongest. This makes for a dangerous combination, and despite its power, Rhyhorn are rarely used as laboring animals in the animé or the manga. In fact, if it charges an enemy, it often forgets why it charged by the time it strikes. Despite its relatively small stature, it is so strong it can send something as big as a truck flying. Its bones are 1,000 times harder than human bones. The horn is smaller in females than in males.[1]

Although it can charge very fast due to its powerful legs, it cannot turn quickly; the range of motion of its legs are similar to a knee bending. A shiny rhyhorn is brick red all over.

Rhyhorn can have one of two special abilities: Lightningrod or Rock Head. Lightningrod draws all electric attacks to it in 2-on-2 battles,which it is immune to, and Rock Head prevents it from taking damage from moves that harm the user as well as the target (such as Take Down).

Rhyhorn's move list has been modified many times over the years. Rhyhorn's current list includes mostly Normal-type moves, plus a few Rock-type, Ground-type, and Bug-type moves. It is a straightforward physical fighter.

Rhyhorn's Speed stat and its special stat(s) are in the bottom 10% of all pokémon. However, its Defense stat is in the top 20% of all pokémon, and no other stat is below the top third.

A Rhyhorn is used by the Team Rocket boss, Giovanni, in Pokémon Red and Blue and Pokémon FireRed and LeafGreen.

The cry of Rhyhorn is identical to that of Charizard. Several first generation Pokémon have identical cries so space could be saved in the first games.

At the start of Bulbasaur's Mysterious Garden, Ash's Bulbasaur was battling a Rhyhorn belonging to a Hiker.

Rhyhorn was one of the Pokémon that was captured and cloned by Mewtwo in Mewtwo Strikes Back.

The first Pokémon that Ash and co. saw at Pinkan Island in In the Pink was a Rhyhorn.

A Rhyhorn that belonged to Noland was seen in Numero Uno Articuno.

In the Pokémon Special manga, Rhyhorn debuts in the Red, Green & Blue chapter in Raging Rhydon as a Koga's Pokémon, since it's defeated by Red's Pika, it's forced to evolve with a mysterious injection. 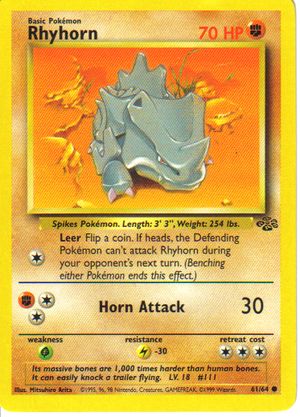 Rhyhorn, as seen in the Pokémon Trading Card Game

Almost all of the Rhyhorn cards are commons. The two exceptions are the level 25 Brock's Rhyhorn (a rare), and card 38 Team Magma's Rhyhorn in EX Team Magma VS Team Aqua (an uncommon).