Despite sharing many similarities with Age of Empires II, Rise of Nations is not part of the Age of Empires series. It was created by a different developer, Big Huge Games, being led by designer Brian Reynolds. Like AOEII, it was published by Microsoft.

The game lets you control a civilization on a map starting from the Ancient age, all the way to the Information age. This means your buildings and troops will progress from huts and spearmen to skyscrapers and tanks. The game attempts to be reasonably accurate with its history, such as having specific units for each civilization, such as the Samurai and Gun Samurai for the Japanese.

The game plays much like other standard setting RTS games like Starcraft and Age of Empires II. It makes some changes to the formula, in an attempt to focus more on combat, without completely losing the importance of managing your cities.

There are a handful of essential, basic resources. These are wealth, timber, metal, food, knowledge and oil. Timber, wealth, food and Metal are necessary to produce basic units. Unlike most RTS games, there are no drop-off points for resources; Resources are ready to be used as soon as a villager gathers them. Wealth is obtained through taxes, trade routes between your cities, and markets. Timber is obtained by setting up a woodcutting camp near trees (The more trees nearby, the more timber you get at a time), though the trees will never disappear. Food is obtained from farms, which you can only have 5 per city. So if you need more, players will have to build new cities. Knowledge is produced at buildings called Universities. A university alone will produce very little knowledge. By creating Scholars at your university, and creating more universities, you will increase the knowledge output. Knowledge is used for researcing upgrades at the Library building. Oil can only be mined when players advance to the Industrial Age, where oil deposits begin to appear, and they can build mining drills. Oil is used to make many units and vehicles in the Industrial Age and onwards. 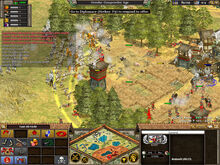 Yeah, I turned on infinite resources to get this pic.

There are also a variety of other resources that are placed randomly on the map, all filed under "rare" resources. These are other resources that civilizations would use but are not as essential as the basic ones above. These include, but are not limited to: Silk, fur, bison, uranium, sulfur, titanium, gems, and cotton. Basically, when a player sends a Merchant (a unit created from Markets) to one of these spots, they will become a merchant of that particular product. What this does it add bonus gains to your basic resources. For example, having cotton will give you extra timber and gold growth.

One of the most important buildings, one that you start off with automatically, is the Library. Here, research and upgrades that affect your entire civilization take place. These are: Ages, Military, Science, Commerce and Civics. Ages changes your society as a whole, much like the Age Advancement system in the Age of Empires series. It will open up new units, new research, and change how your buildings look. It will advance you from the Ancient Age of spears and sticks to the Information Age of Nuclear Missiles and Bazookas. Military raises the amount of units you have. Science allows new buildings and new research to be built. It's a very specific but essential category. Researching it will let you build buildings that increase your local Timber/Food/Metal/Oil output. It will also let you increase the amount of Knowledge you gain.

The ages are as follows:

After this point, four special, futuristic technoliges can be learned. They are:

Every research will effect everything such as military researches for the Japanese. Each military reserch will give players using Japanese more damage against buildings.