Robert Garcia (ロバート・ガルシア, Robāto Garushia?) is a video game character created by SNK Playmore, formerly known as SNK. Robert stars in the fighting video game Art of Fighting as the lead character along his best friend Ryo Sakazaki. The game features both of them as practitioners of the Kyokugenryu Karate fighting who search for Ryo's younger sister, Yuri Sakazaki, who was kidnapped by a criminal named Mr. Big. He is additionally featured in most of The King of Fighters crossover games, in which starts into the King of Fighters tournament in teams composed of three members. Thus far, he has been a playable character in every edition of KOF except The King of Fighters XI; however, he has recently been added back in for the PlayStation 2 version of the game.

Robert has additionally appeared in the film adaptation of Art of Fighting, and the manhua from The King of Fighters. He received mixed critics from video games publication, which praised his design, but some also noted him similar to the Street Fighter main characters. He has also been well received by gamers, appearing in several popularity polls developed by journals and websites.

In Japanese, Robert Garcia has been voiced in video game by Eiji Yano (during play in AOF), Kay Inage (AOF2, KOF '94~'95, KOF XI, NBC, KOF XII), and Mantarou Kouichi (AOF3, KOF '96~2003). Robert Garcia was also voiced by Masanori Ikeda in the anime, and by Hideo Ishikawa in the Dengeki Bunko drama CD. In English, James W. Hove voiced Robert Garcia during a demo.

Robert is the son of Alberto Garcia, a wealthy Italian businessman and best friend of Takuma Sakazaki, the master of Kyokugenryu Karate. Alberto persuaded Takuma to teach Robert discipline through Kyokugen-ryū. While living with his new sensei, Robert quickly befriended Takuma's children, Ryo and Yuri. Ryo became his best friend, and Robert eventually developed romantic feelings for Yuri. He has held a special relationship with Yuri ever since he first met her, and would likely wed her if not for Takuma and Ryo, who either overprotect Yuri out of habit or suspect that Robert might take her for granted. However, Yuri then also comes to like Robert, which Ryo notices and tells Yuri to follow him.[5]

Robert uses the Kyokugen-Ryu fighting style to fight but focusing more on kicks attacks unlike Ryo and Takuma who focus on punches. Robert is the only character to ever possess three different super levels containing the same move. In King of Fighters 2002, he possessed DM, SDM, and HDM versions of the Ryūko Ranbu (Dragon-Tiger Crazy Dance), each with increasing hits per damage, the final one being unblockable as well. Along with Chizuru Kagura, he is one of the characters whose move input changes most constantly between games, though he occasionally reverts to his original moveset. For example, in The King of Fighters 99 and 2000, he was a "charge-motion" type character, like Leona or Ash Crimson. 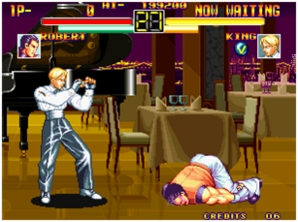 In Art of Fighting, Yuri is kidnapped by the criminal Mr. Big.[6] As such, both Ryo Sakazaki and Robert go to Southtown to interrogate fighters untile finding Mr. Big.[7] After defeating Mr. Big, Ryo and Robert face an assassin named Mr. Karate purportedly held Yuri. Ryo nearly finishes him off, but Yuri sneaks in and tells Ryo not to kill him since Mr. Karate is their father, Takuma.[8] The second Art of Fighting game features Robert, Ryo, Takuma and a now fighter Yuri entering into the first King of Fighters tournament held by Geese Howard, the main responsible for the kidnap. In Art of Fighting 3 Robert visits Central America to help Freya Lawrence, a childhood friend, save her brother Wyler, whose demonic power made him go berserk.[9] 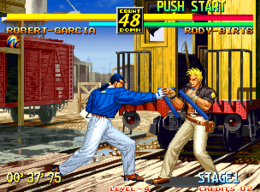 Besides the games from SNK, Robert also appears in the Art of Fighting anime film from 1993. The plot from film is loosely based on the first Art of Fighting game, with Robert and Ryo searching for Yuri, who has been kidnapped by Mr. Big. However, in the film Mr. Big wants to obtain a diamond held by Ryo and Robert He is voiced by Masanori Ikeda in the Japanese version of film, and by Nick Sullivan in the English adaptation.[25] Robert is also featured in the manhua adaptations from The King of Fighters series, which tell how he participates in the fighting tournaments.[26] 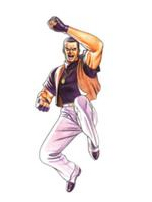 Robert has been well received by gamers and has appeared in popularity polls from journals and websites. In Gamest's 1997 Heroes Collection, Robert was voted as the staff's forty-sixth favorite character. He shared the spot with seven other characters, including Samurai Shodown character, Hattori Hanzo, and Darkstalkers character, Demitri Maximoff.[27] In January 30, 1995 issue of Gamest magazine in Japan, Robert ranked at No. 36 (tied with Iceman from X-Men: Children of the Atom) in list of Top 50 Characters of 1994.[28]

Videogame publications have commented on Robert's character, adding praise and criticism. David Simpson fro AceGamez noted Robert to be very similar to the Street Fighter main characters due to his practice in karate and his relation with Ryo Sakazaki as both are best friends and rivals.[29] Videogamer.com writer Wesley Yin-Poole labeled Robert and Ryo as "two double-hard bastards" and commented they had the best designs from the Art of Fighting series in comparison to the other characters who had "wicked" appearances.[30] Spanner Spencer from Eurogamer also added that Robert had the best appearance from all the characters of the Art of Fighting series but labelled him as a "greasy yuppie".[31] In a review from The King of Fighters XI, Eurogamer writer Luke Albiger noted Robert's addition to the game as hidden character is a good way to compesate the several recurring who were absent.[32] However, Kurt Kalata from Armchairempire.com criticized that unlocking Robert in that game was "a pain" due to the difficult challenges the players has to do to unlock him.[33] 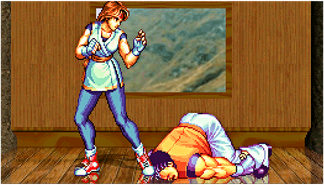 When Robert was first introduced in Art of Fighting, he was infamously known for his "facedown" defeat pose. If he's defeated by chip damage, or a light attack, he slumps forward in a humiliating pose where he's bent over on his knees, with his butt protruding upward. Fans often mock and ridicule Robert, especially since he is a classified as a determined and strong protagonist, for entering such humiliating position. Designers stated the reason for this was to weaken Robert's image as the main hero, as that title goes to Ryo. Furthermore, they joked that rendering a rich and arrogant jerk like Robert down on his knees with butt in the air is a suitable punishment and thus to balance his arrogance nature. Interestingly, in Art of Fighting 2 when Robert is defeated by Yuri, her victory quote involve her forcing her boyfriend to get on his hands and knees and beg for mercy. Referring to his defeat pose, it is implied that he succumbed to her demands, prostrating before her and plead for forgiveness.