From Codex Gamicus
Jump to: navigation, search
This article is about the first game in the video game series. For the entire series, see RollerCoaster Tycoon (series).

Chris Sawyer originally wanted to create a sequel to his highly successful Transport Tycoon, but after becoming obsessed with roller coasters, he changed the project into RollerCoaster Tycoon. Sawyer wrote RollerCoaster Tycoon almost entirely in assembly language, a difficult feat considering the game's complexity. Some functions were written in C to interface with the Windows operating system.[1]

The game was to be called White Knuckle for the majority of the game's development. However, to follow the tradition of the Tycoon titles, most likely for marketing purposes, the game was renamed accordingly.

For his efforts, Chris received over $30 million of the $180 million brought in by the highly popular game.

A feature length movie adaption is set to begin production, as Sony Pictures Animation has pre-emptively picked up rights to the video game. Harald Zwart is spearheading the development of the big-screen adaptation as a possible directing project and will executive produce. David Ronn and Jay Scherick are attached to write what will be a live-action/CGI hybrid.[2]

The premise of the game is to complete a series of preset scenarios by successfully building and maintaining theme parks. The key to any park is building a large amount and diverse range of rides for the visitors. Players can choose from dozens of roller coaster types and can also build log flumes, carousels, bumper cars, haunted houses, go karts, ferris wheels and swinging ships, among other rides. The player also has the option of building their own roller coaster designs as well as other rides by laying out individual track pieces, choosing the direction, height, and steepness, and adding such elements as zero g rolls, corkscrews, vertical loops, and even on-ride photos, using a tile-based construction system. The intensity and type of rides must be balanced, as visitors' preferences vary significantly from person to person; some prefer exciting rides and have high nausea tolerance levels, while others are just the opposite.

Roller coasters must be designed carefully so that they do not crash. Rides must be properly maintained, for example by building brakes, or the chance of a crash caused by ride malfunction increases (very old attractions are also highly susceptible to such malfunctions). When a crash happens, and the park manager opens the ride without any modifications, the guests will not enter the ride for their safety. In an event of a crash, park guests will die, which will drastically decrease the park rating and will lower the park's popularity. 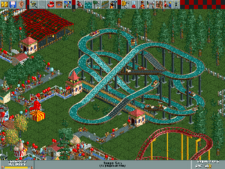 The geography and landscaping of the park can be modified, allowing the player to lower/raise terrain and add water to improve the park's attractiveness, as well as to allow rides to fit into their surroundings more easily. Track rides (such as roller coasters) and pathways may be constructed underground, either partially or even entirely. Players must also balance the needs of the visitors by strategically placing food stalls, concession stands, bathrooms, and information kiosks. Paths must be added to connect the attractions and must be done efficiently so that the visitors do not become lost and lose happiness. If there is no path leading from the exit of a ride, for example, the guests wander around until they find a path.

Adding items such as garbage cans, benches, lights, and various thematic elements and forms of architecture will improve the visual quality of the park. Coordinated themed areas please park guests and increase a player's approval rating. However, garbage cans and benches also serve a practical purpose, keeping the park clean, as it will allow the visitors a place to throw away trash and rest after rides (preventing them from vomiting). Park maintenance is also important to keeping visitors satisfied, and the player must hire handymen (to sweep paths, empty garbage, water flowers and mow lawns), mechanics (to inspect and fix rides), security guards (to prevent vandalism), and entertainers (to increase the happiness of guests). The player must also balance his/her budget by managing the staff and ride operation costs, as well as setting ticket prices, entry fees, and concession prices.

There are 21 scenarios included with RollerCoaster Tycoon, as well as 30 more in the Corkscrew Follies extension pack, and another 30 in the Loopy Landscapes extension pack, leading to a whomping 81 scenarios if you have the whole set installed. Some scenarios afford the player empty tracts of land on which to build from scratch, but most place the player in control of an already operational park (although these parks are usually underdeveloped, dilapidated, or suffering from poor planning). To complete a scenario and unlock a new one, a certain objective must be met. For most scenarios, the objective is to have a minimum number of guests by the scenario's deadline of one to four years. Years in the game are only eight months long; from the start of March to the end of October (mirroring the seasons real-life theme parks are in operation, except in the southern hemisphere). On some scenarios, the player is also required to raise the park value above a certain level by building roller coasters and other rides and maintaining the park well. However, scenarios in the Loopy Landscapes extension pack are usually very unique and contain winning conditions that are extremely different from those in the rest of the game. You'd need to see the Expansion packs and sequels section of the page for more info.

There is also a built-in tutorial that can be accessed from the main menu. It takes place in Forest Frontiers, the easiest scenario in the game. It shows how to build a merry-go-round, open the amusement park, build a custom roller coaster, hire a mechanic, and exit the game. The player can take control of the tutorial and play it as a normal game at any time by clicking or pressing a keyboard button.

Guests are the visitors to the park. They have specific tastes in rides, such as liking rides with an intensity rating "above 4" or "between 2 and 6". Their nausea tolerance levels vary, from "none" to "high". Guests have ID numbers instead of names ("Guest 212"), but there is an optional feature which gives them random names that comes with the expansion packs or they can also be renamed individually by the player. Players can choose to track certain guests. Guests only vary in clothing colors, they all have the same age, hair color, style, and skin color. Visitors bring certain amounts of money with them to the park, but they may have different amounts. A guest will always pay to enter the theme park, as long as they have enough money to pay the entrance fee. Guests have opinions about rides, the park's scenery, and what they need at the time. However, the guests' AI is very limited, with little common sense type behavior. For example, a guest may get on a roller coaster that is obviously bound to crash (too steep a hill, etc.), or not be able to find a particular ride even with a park map.

RollerCoaster Tycoon features 21 scenarios, with the first five open from the start. Successfully completing a scenario will unlock the next one. Additionally, Mega Park is unlocked when all 21 scenarios are completed. This scenario has no objective (except "Have Fun!"), but allows the player to build on nearly the entire map, and eventually has all attractions available to build. This is the closest to a "sandbox" park, except the player does not have an unlimited amount of money to work with, only a $50,000 loan. 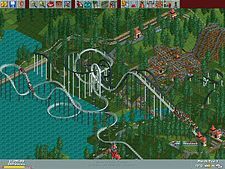 Some scenarios are based on real parks. For example, 'Katie's Dreamland' (Katie's World in the US Version) is based on Lightwater Valley, complete with that park's signature The Ultimate roller coaster (The Storm).

There are two official scenarios available for download from Atari's website, Fort Anachronism and Alton Towers. Alton Towers was included with the Loopy Landscapes expansion and was updated to take advantage of the new game components. Both scenarios are also included as part of RollerCoaster Tycoon Deluxe. The UK edition of RollerCoaster Tycoon Deluxe contained Blackpool Pleasure Beach in place of Fort Anachronism.

The original PC version was wildly popular for its originality and success in simulating a theme park. GameSpot rated the game 8.6/10,[3] while IGN scored the game an 8.5/10.[4] Common complaints about the game were that it lacked a sandbox mode and that there were sometimes awkward building situations caused by the isometric camera angle.

The Xbox port got mixed ratings due to very little improvement. The only exclusive features are no menu buttons (they were accessed by holding the X and B buttons) and a magnifying glass cursor that can be toggled by clicking the left thumbstick.

There were two expansion packs released for the original RollerCoaster Tycoon game. The first was Corkscrew Follies (known as Added Attractions in the UK), which added additional scenarios, rides, facilities and also new scenery with additional themes. One of the most important additions of this expansion pack is a banner sign, which can be set to display a "Do Not Enter" message to guests - a rule that they will always adhere to. This allows the player to designate certain paths as being only for staff, or control guest movement on busy paths using a one-way system.

The second expansion pack, Loopy Landscapes added much of the same, but also introduced a wider variety of scenario objectives beyond the park value or visitor number criteria used previously. For example, the player might now be expected to build a set number of rollercoasters above a minimum excitement rating, or achieve a certain amount of income from ride tickets. Other scenarios allowed the player an unlimited amount of money to build the park and hire staff, with failure occurring if the park rating dropped below a fixed minimum.