Roy is one of the Koopa Kids. He wears red sunglasses and has a pink head and shell. Roy gets his name from Roy Orbison, a rock and roll singer-songwriter.

In Super Mario Bros. 3 Roy steals a magical wand from the king of Sky Land and transforms him into a crown-wearing vulture (In remakes the king is transformed into an Albatross, the bird enemies from Super Mario Bros. 2). Mario faces Roy after the defeat of Roy's bro, Iggy Koopa. Roy along with Ludwig is harder due to his stomping that can paralyze Mario but despite this Mario does away with this tough koopa and reverts the king to his normal self.

In Super Mario World, Roy is the fifth boss Mario must face. His castle is located outside the Forest of Illusion, but he is still that world's boss. Roy along with Morton caan walk on the walls to try and crush Mario but his walls close in on you bu was defeated and sent flying into the wall

Roy continues his traditional placement in the Koopa Kid lineup in Mario and Luigi: Superstar Saga. In this game Roy must be defeated in 8 turns, as it was with his brother and sister Larry and Wendy, respectively. Roy attacks like his brothers Morton and Ludwig, only longer and stronger.

In the comics Roy appeared in it was revealed that he had a pet bunny named Pookie, whom he would often beat up for Bowser's amusement. 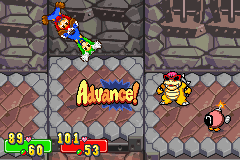 Roy appearing in Mario & Luigi: Superstar Saga. I don't even want to know what those brothers are doing.