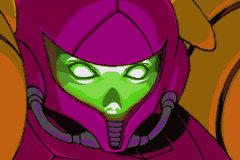 The SA-X is an X Parasite that infected Samus Aran on a trip to SR388. When it was surgically removed to save her, SA-X was free and wrecked havoc on the space station it was being held. SA stands for Samus Aran, X stands for the X itself. The SA-X debuted as the main enemy in Metroid Fusion. In this game, Samus often had to resort to running and hiding from the SA-X, due to it having all of her old powers, such as the ice beam which she was vulnerable to because of her Metroid DNA, making them much stronger than the new Samus.

Because the SA-X is an X Parasite, it reproduces asexually, meaning that there were many SA-X roaming the station by the end of Metroid Fusion. As an X Parasite, it also hates Metroids, and took efforts to destroy many of the Metroids that were secretly being bred on board the Galactic Federation space station. Near the end of the game, Samus must fight the SA-X and get her powers back from the SA-X. When Samus fights the final boss (the Omega Metroid) a familiar scene happens. It attacks Samus and she loses all but one health, but SA-X saves her and sacrifices itself. Samus then absorbs the SA-X core and her suit turns orange. Her old powers were restored, and she could now kill the Omega-metroid and escape the space station before it impacted SR-388.