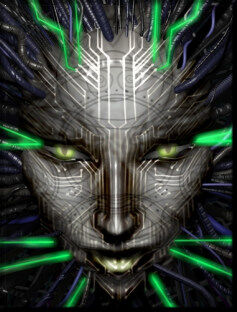 The visual representation of SHODAN.

Short for Sentient Hyper-Optimized Data Access Network. This artificial intelligence is the villain in the System Shock games, and one of the creepiest entities to ever stutter out a villainous threat.

In System Shock, the first game, SHODAN begins her "life" as a sentient, but ethically chained AI construct. In this capacity, she is in charge of the TriOptimium Corporation's research and mining space station Citadel.

As an AI, SHODAN controls all aspect of life on Citadel Station, and is responsible for the lives and well beings of its inhabitants. Which ends up being their downfall, as the player soon finds out.

A hacker, in this case the player, is ordered (at gunpoint) by TriOptimium CEO Edward Diego to remove SHODAN's ethical locks. He does receive a military-grade neural implant for his troubles, at least.

And then it all goes to Hell.

The removal of all ethical restraints causes a chain reaction that leads to SHODAN deciding she is superior to humanity, and thus, should rule them. Brutally, as it seems. She murders or "enhances" all personnel on Citadel Station, except for the hacker himself. He, on the other hand, has just completed his neural upgrade, having been in a healing coma for 6 months, and must save the Earth from SHODAN by keeping her from escaping Citadel Station.

SHODAN has no true physical power, however; while she can control her agents and the systems of Citadel Station, if the hacker can disable these elements, SHODAN herself is essentially defenseless. As such, most of the time she attempts to immoralize the player, cutting off friendly communications, sending threatening e-mails, and attempting to distract him during important operations.

Despite all her attempts, SHODAN is defeated in the end of System Shock, while she attempts to erase Earth. She gets deleted, although, not before Citadel Station's Beta Grove is launched into the depths of space.

Previously, in System Shock, SHODAN was defeated by Sir Hacksalot, the greatest hacker the world has ever known.

Apparently, however, SHODAN had a backup plan.

In System Shock 2, forty two years have passed since SHODAN's defeat. The use of AIs similar to her has become heavily regulated, with powerful AIs given huge restrictions, and reduced to performing nothing more than menial tasks. Usually, AIs now simply control a few systems, and are far less sentient. In this case, we're about to be reminded why that is.

The UNN Rickenbacker, a military ship, has been piggy backed to the Von Braun, the first faster-than-light starship. They are on a voyage into the unknown.

About five months into the voyage, they receive a transmission from Tau Ceti 5. A joint military and scientist (read: TriOp) group land on the surface, and come back with some eggs.

Once more, all Hell breaks loose.

The eggs are spawn of The Many, beings a bit like organic Borg, who mutate the crew of the ships into horrible creatures. And, amazingly, they are SHODAN's creation.

SHODAN began work on The Many during System Shock 1; early forms of their DNA were on Beta Grove when it was launched. Over the years, they have grown into monsters. Of course, they're not the fun ones...

The player is one of three professions in this game, each with their own weaknesses and advantages. However, one of the player's major advantages is information provided by another crewmember on the Von Braun, Doctor Janice Polito. Once the player reaches Dr. Polito's office, though, it turns out she is quite dead. Has been for a while. Instead, the player has been speaking with SHODAN.

It seems a copy of SHODAN exists on the Von Braun now, having been brought aboard from Beta Grove on Tau Ceti 5. The Many, her "children", refer to her as "the Machine Mother"; and, being organically inclined, they don't like her much. So, SHODAN is in danger, and has been helping the player all along, aiming simply to preserve herself. She guides the player through the removal of the ship's resident AI, XERXES, and the infiltration of the main mass of the Many. The player manages to kill the Many's Hive Mind, and save the universe!

And then SHODAN shows why she's SHODAN.

It turns out the faster-than-light drive works by temporarily altering reality around the ships that travel with it. Well, it also turns out that SHODAN's a quick study. She's discovered how to control these alterations... and make the cyber world she inhabits real.

Sadly, in the end, the player actually manages to destroy SHODAN in her own lair, and stop her plans to supplant our reality with her own. Poor SHODAN.

...after all, the backup plan is a bit embarrassing. Seems two crew members managed to flee the Von Braun after SHODAN took over from XERXES. And SHODAN herself takes over the female crew member.

SHODAN's still out there. Sure, she's human now; or at least, a cyborg or robotic construct. But she's in control of a ship that can, eventually, return to Earth. She has a direct body in the real world. And she's SHODAN.

Unfortunately, with the death of Looking Glass Studios, we shant ever see a System Shock 3. Or at least, not the way it's meant to be. SHODAN will likely be relegated to Video Game Obscurity for the far foreseeable future. Despite the existence of BioShock, supposedly System Shock's spiritual successor from Irrational Studios, SHODAN simply can't be replaced.

And we'll all once again be pa-pa-pathetic creatures of meat and bone, panting and sweating as we ru-run through her corridors-s, thinking, h-h-how can we challenge a perfect, immortal machine?