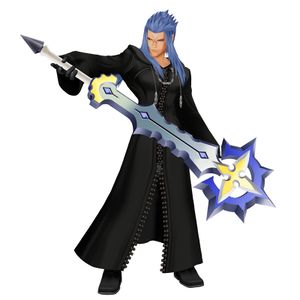 Saïx appears in Kingdom Hearts II. He is also known as the "Luna Diviner". He has an X-shaped scar on his face and wields a claymore. He draws power from the moon and controls the Berserker Nobodies, who wield weapons like his own. Saïx is voiced by Kirk Thornton in the English version of Kingdom Hearts II and Ginpei Sato in the Japanese version.

Saïx first appeared in Kingdom Hearts II in Hollow Bastion. He appears again in Twilight Town after Sora defeats his Berserker Nobodies and warns Sora of Axel's intention to turn him into a Heartless. After Sora defeats the Heartless army at Hollow Bastion, Saïx appears and explains Sora's purpose in the Organization's plans and refuses Sora's request to meet Kairi, whom Saïx kidnapped. After Saïx summons a horde of Heartless, Maleficent attempts to use her own Heartless to battle Saïx, but his Nobodies quickly dispatch them and overwhelm Maleficent. Later, at the World That Never Was, when Naminé helps Kairi escape, Saïx appears to deal with the two, but is stopped by Riku in the guise of Xehanort's Heartless; Saïx fled. Once Kingdom Hearts neared completion, Xemnas gives him permission to destroy Sora and his friends. Despite appearing calm, Saïx shows his true nature when he fights Sora in the World That Never Was by absorbing the light from the Kingdom Hearts moon, which puts him in a berserk state where he wildly attacks with his claymore. After Sora defeats him, he dies while pining for Kingdom Hearts to give him his heart.