Sam Fisher is the main character in the Splinter Cell series of games. His voice acting is done by actor Michael Ironside. He is presumably around 42 years old, but still able to do wall-splits and sneak around with the best of them. Unlike Solid Snake, the other stealth action superstar, Sam Fisher does not have any genetic engineering. He has his trademark Mutli-Vision (Night/Thermal/EMF) Goggles and an SC-20K assault rifle.

Fisher was the first recruited member of the Splinter Cell program for Third Echelon. He was coaxed back into the field in the first game. His wife and his daughter has been dead for a while now. Fisher is described as masking his fear during missions with a dark sense of humor.

The novel based on the game gives more detailed background information on the character, such as the fact that he really likes cooking. It's a hobby, I guess.

Little is known about Sam Fisher in Double Agent, but Sam goes through radical changes. His daughter is apparently killed in a car accident by a drunk driver. Then he shaves his head, goes on a bank-robbing spree where he kills civilians, and then turns himself in. Many have speculated that the deaths were all faked and Sam is going deep, deep, undercover, but this has not yet been confirmed. 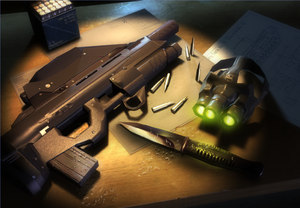