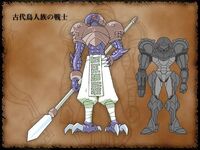 A Chozo warrior standing next to Samus

A large mechanic of the Metroid series is the capabilities of Samus Aran's power suit. Every Metroid game has item pickups that upgrade the suit, allowing Samus access to new areas, in addition to giving her an easier time against tougher enemies. Her suit was designed specifically for her, and is molded after Chozo battle armor. It has ability to change forms and colors by absorbing Chozo artifacts. The Chozo were chummy with a few other races, namely the Luminoth. Samus's suit can interface with suit data from these other races as well.