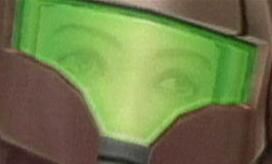 The face of an angel... and the DNA of at least four different species. Consult a priest before perusing.

Samus Aran's Power Suit has several interchangeable, upgradeable components. One of those is her Visor. While primarily used for seeing things, the Visor can also be altered to perform other useful visual functions.

Most, though not all, visor upgrades appear exclusively in Metroid Prime and Metroid Prime 2: Echoes, since they are the only ones played from a first-person perspective. An X-Ray Visor was also available in Super Metroid, but unfortunately it could not be used to see through her suit.

Every one of these visors also has the capability of locking on to and following hostile targets (this has the additional effect of allowing guided missiles to follow the target, and power beam shots to, er, bend towards the target).