The name Sandshrew is derived from the words sand, where it prefers to live, and shrew, a type of insectivore. Its Japanese name may come from sand and armadillo.

Despite its name, Sandshrew's appearance borrows more from the armadillo or the pangolin rather than from the shrew. It is a short, yellow, rodent-like creature, covered in scales and with clawed paws. Its eyes are large and black.

Sandshrew's natural environment is deep underground in arid, sandy locations with very little moisture, the desert being the best example. It chooses this habitat to keep its hide as dry and tough as possible, while the sand also provides it with a good camouflage.

Sandshrew emerges from its burrow only when hunting. It lurks by the opening to its nest, its body blending with the surrounding soil. If prey approaches close enough, it lunges, grabs the victim, and carries it with it back to its nest, where it eats it.

When threatened, Sandshrew's primary means of defense is to instantly curl up its body into a ball, leaving only its tough skin exposed (compare with the defensive measures of hedgehogs, armadillos, and pangolins.) When it is rolled up like this, Sandshrew has the potential to withstand many attacks, as well as being dropped from a great height (also similar to hedgehogs.).

Despite its aversion to water, even Sandshrew needs it in order to survive. Its metabolism is configured in such a way so that it can absorb water with minimal waste, allowing Sandshrew to get by with small quantities of it. Its low speed and metabolisim in many ways make it the exact opposite of a real-life shrew.

Sandshrews make lovable and loyal pets in the desert, but since they are finicky eaters they are tough to raise.

Finally, in Pokémon Ruby and Sapphire Sandshrew is found in Routes 111 and 113, while in Pokémon Emerald it can be only be found on Route 111 and inside Mirage Tower.

Like most Ground-type Pokémon, Sandshrew has excellent defense, but it also has a very good attack stat. On the downside, it is a bit on the slow side and its special defense is very low. Unfortunately, Sandshrew does not learn many powerful attacks naturally, forcing players to resort to Technical Machines.

The Sandstorm move is especially useful for a Sandshrew: thanks to its Sand Veil ability, its evasion will then rise, causing the opponent to miss Sandshrew once in a while. Furthermore, the Sandstorm will inflict a small portion of damage periodically to most types, resulting in a fair amount of damage.

Some players accent Sandshrew's evasion further using the Brightpowder or Lax Incense item or by employing the Double Team move, while Toxic is often used in conjunction with Sandstorm to accumulate indirect damage. However, Sandshrew's decent physical also allows for a more offensive strategy, involving moves such as Earthquake, Rock Slide or Brick Break. It can also learn Metal Claw, Crush Claw, and Rapid Spin as Egg Moves.

In Pokémon Emerald, it can be taught the Rock-type move Rollout by a man standing near the Mauville City Gym, allowing it access to the Defense Curl/Rollout combo.

Sandshrew also are found in the Nintendo 64 game Pokémon Snap in the Valley course. They are burrowed underground, so to lure one out, one must hit a nearby Geodude hanging on a cliff with a Pester Ball to knock it down to the ground. The force of the landing will cause any Sandshrew in the area to pop out, and then a picture can be taken.

Sandshrew's most prominent appearance was in episode #8 (The path to the Pokémon League). It belonged to a trainer called AJ and had many notable traits, such as the ability to withstand water and its knowledge of Fissure, which it used to dispatch of Team Rocket. Sandshrew had made a fair number of other appearances, but all of them are cameos.

Professor Oak had a Sandshrew in the Electric Tale of Pikachu. 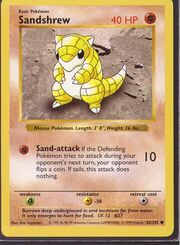 Sandshrew in Base set of the TCG

Sandshrew has appeared in the Pokémon Trading Card Game in the Classic series. It first appeared in the Base Set, then base set 2, Gym Heroes, as Brock's Sandshrew, Legendary Collection, Skyridge, EX Sandstorm, EX Team Rocket Returns, and EX Delta Species.