The name Sandslash is a portmanteau of the words sand and slash. Its name in Japanese comes from sand and pangolin. In the beta versions of the games, its name was Sandstorm.

Sandslash is a moderately large, bipedal porcupine or echidna-like creature with hard yellow skin, lengthy claws, and a back loaded with an assemblage of large brown spikes. These spikes are hardened sections of Sandslash’s hide that grow to form a natural self-defense. Each spike remains on Sandslash for one year, after which it falls off and a new spike grows in its place.

Sandslash is a resilient creature that lives in desert areas, particularly areas close to dry forests. It is commonly seen either climbing up trees or digging into the dusty ground, both activities which it is suited for thanks to its claws. However, though its claws are strong, they are not indestructible; they occasionally snap when Sandslash digs at an incredibly fast pace. The claws will have started to grow back by the next day, though. The most notable behavior that Sandslash performs to cope with its environment is its method of curling up its body to become in essence a ball covered with large spikes, much like the hedgehog, armadillo, or pangolin . Sandslash rolls up so that the spikes shade its inner body from the sun and therefore prevent heatstroke that can result from the scorching heat that accompanies daytime in the desert.

Sandslash is a fully-armed predator when dealing with other Pokémon in the desert areas that form its natural environment. When attacked, Sandslash rolls up into its spherical guise and its spikes arrange to form its defense, after which the Pokémon will either roll away to escape or roll towards the opponent to attack. When trying to flee in this manner, Sandslash exerts specific force on the ground to kick up small-but-blinding dust clouds in its wake, hoping to discourage other Pokémon from following it. When attacking in this manner, though, Sandslash proves itself adept at making the opponent flinch with the spikes of its rolling body just before uncoiling itself and hacking with its claws. It prefers attacking from higher elevations when targeting prey.

Sandslash has very good defense and attack stats, average HP, and lesser speed, special defense, and special attack. It can learn Slash, Sandstorm, and Defense Curl by leveling up, Rollout from the Emerald move tutor (to combo with Defense Curl), Counter, Rock Slide, and Swords Dance both as egg moves and as moves available from in-game-tutors, Metal Claw and Flail as egg moves, and Iron Tail, Earthquake, Brick Break, Aerial Ace, and Dig as TM (Technical Machine) moves.

Sandslash is generally obtained by evolving a Sandshrew at level 22. However, it can also be found in the wild in a fair number of locations. In Pokémon Blue and Pokémon Yellow it is found in the Cerulean Cave/Unknown Dungeon, as well as Route 23 on Blue. In Pokémon Gold and Pokémon Crystal, it can be found on Route 26, as well as Route 27 and Mt. Moon on Gold, and Victory Road on Crystal. In the LeafGreen version for GBA, it is found on Route 23 and Victory Road.

Since Pokémon Ruby and Sapphire, Sandslash can learn Crush Claw as an egg move if bred with a Zangoose that knows Crush Claw. Sandslash’s Ground-type gives a STAB (or Same-Type Attack Bonus) to its already powerful Earthquake move along with its attack stat but leaves Sandslash succeptible to Water, Grass, and Ice-type moves, but immune to electric type attacks. And Sandslash’s Sand Veil ability increases its evasion while a Sandstorm is in effect. All of the above adds up to a solid Pokémon to train when battling in-game trainers, but it is not commonly seen in hardcore competitive play because its strengths cannot be exploited as much as the strengths of many other fully-evolved Pokémon.

A Sandslash is also found in the Nintendo 64 game Pokémon Snap in the Valley Course. It will burrow underground before a close-up picture can be taken, so to drive it out of the ground one must knock two nearby Geodude hanging from the cliffs off and to the ground. This will cause a Graveler to fall down as well, and the force of that landing will cause the Sandslash to resurface.

Just like its pre-evolved form Sandshrew, Sandslash doesn't appear that much in the anime. Only a few trainers that have crossed Ash's way have it.

Its first appearance was "To Master the Onixpected". It was caught in the "skin" of the Giant Onix. The Sandslash getting caught in the Onix's "skin" was the reason why the Giant Onix went on its rampage. Bruno of the Elite Four managed to get the Sandslash out. Another appearance of Sandslash's was in the Johto saga, during the episode in which Ash captured his Cyndaquil, another trainer that had his sights set on the Cyndaquil as well, used a Sandslash to attempt to capture the little creature. Mewtwo also cloned a Sandslash in Pokémon: The First Movie. Because of its rare appearances in the anime, it is one of the most neglected Pokémon (compare with Weepinbell)

Sandslash's most notable appearance is in chapter 145 of Pokémon Adventures, which is in volume 12. In it, Gold and Silver are attacked by a number of spike balls that turn out to be Sandslash. A wild Sandslash is also seen in chapter 43, which makes Bill remember Team Rocket's previous plots, and another is owned by Team Magma in chapter 219. 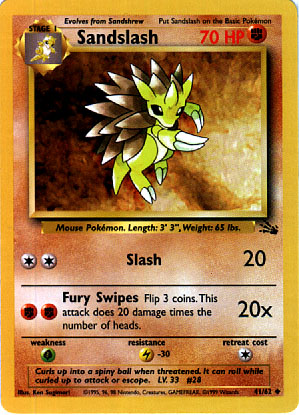