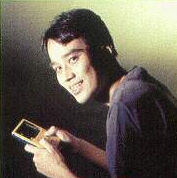 Satoshi Tajiri is a game designer behind Pokémon and all of its sequels. He started the developer Game Freak to create the games. He is largely influenced by fellow Nintendo designer, Shigeru Miyamoto.

Before he got into games, at age 18, he was writing a fan magazine that he produced by hand. The magazine was the original Game Freak, where his future company took it's name. The magazine offered cheats, tips, and other sorts of information. Some issues sold into the thousands. He learned about game designing and technology by taking apart the Famicom and studying the technology. The first game he created, which was done almost solely by him, was Mendel Palace for the NES, known as Quinty in Japan.

The main character of the first two games (Pokémon Red and Blue) and the anime series was named "Satoshi" by default after him. The name was changed when it was brought outside of Japan to "Ash" and "Red".