SchoolMate(すくぅ～るメイト in Japanese) is a 2007 sex & dating video game by Illusion, for the PC. Unlike previous Illusion games, SchoolMate uses a Real-Time 3D Anime Shader. In addition Schoolmate features an added storyline and anime style expressions to the characters. The game is the first in the Schoolmate series, and was released exclusively in Japan. SchoolMate is priced at 9,240円.

The player can choose from 5 female characters to play and from the character he chose he is able to choose to have another character interact, the story or sex styles, the setting, and how the character is dressed. There is also an overall story the player can go through to get a sense of the background. The player must start in story mode.

There is a story mode for each of the 5 female character which the player must go through. In the storymode the player is limited to only clicking to get to the next scenes, similar to the gameplay of interactive fiction games. After the player gets through a storymode of one of the characters, the sex options for that character will be playable and the player will be able to choose his location and the characters dressing options.

The user interface is similar to the one of Rapelay where the player can select multiple sex options from a menu by right clicking and the player can also remove the clothing of a female character in the same manner. But unlike Rapelay, during foreplay this game requires players to drag their desired options into boxes which determines how the female character can be positioned. The game also allows the player to lock specific sexual positions and camera style by left clicking on their respective menus.

Kazuki is the male protagonist. He has recently returned to the place of his birth, Kimikage Island, and transferred into Himeyuri Academy. His mother died in a major island-wide disaster when he was little, but he doesn't have memories from that far back. His family belongs to an ancient clan of the island, though he has little interest in said matters. 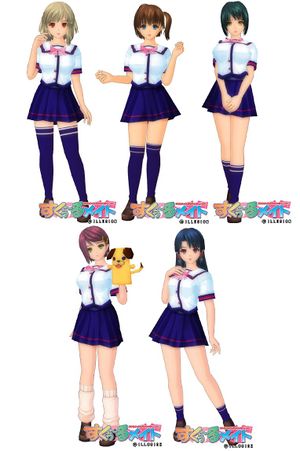 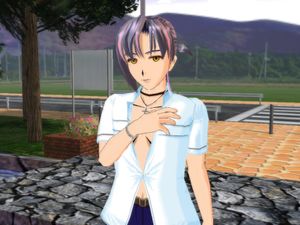 Yume is a blond girl with red eyes. Yume is Kazuki's classmate and childhood friend. Her mother died while giving birth to her, and Kazuki's mother has been taking care of her. While she is very good at domestic matters, she's very forgetful and she loves cats. She's attracted to Kazuki, but is afraid to disrupt their current relationship.

Hiyo is a short haired brunette girl with blue eyes. She likes dancing and moves around a lot during the storyline. She is Kazuki's kouhai (junior). She is a very bright and energetic girl, and calls Kazuki "Oniichan" (cute form of "older brother"). She has a super crush on Kazuki, and gets very "watchful" when any girls are around Kazuki. Her real identity is Prototype #1 of a Communication-purpose-oid created by professor Shinohara. While she hides this fact, the people around her have more or less sensed it (normal humans don't exactly eat batteries) but does not reveal it.

Natsume is a girl with long blue hair. She is very aggressive and kicks the player and other characters during the storyline. She is Kazuki's sempai (senior). She often does things her own way even though it defies common sense. She doesn't like to lose, and often acts before thinking. She is shrouded in mystery.

Mikoto is a girl with short purple hair and green eyes. She is Kazuki's classmate. One night when both of their fathers were drunk, she became betrothed to Kazuki. Usually she has a closed-off attitude, not showing emotion. She often converses by talking to her dog puppet. She is also a ventriloquist who uses a yellow dog puppet.

Fumi is a girl with short teal hair, glasses and large breasts. She is passive towards the player and the other characters. She is Kazuki's cousin and is like an older sister to him. She is the school president of Himeyuri Academy, and she is very good with academics and sports. While she is strict with herself and everyone else, she is extremely lenient and nice to Kazuki, treating him like a little kid. She is the quiet type, not letting her feelings show on the surface, and has a smile on her face regardless of the circumstances. Though on occasions when she does show her feelings, she may say something very unexpected.

Returning to his home, Kimikage Island, after many years, Himura Kazuki enrolled in the Himeyuri Academy. Somehow he got forced into joining the "Mystery Seeking Club"...