Scizor(ハリーセン, Harīsen, Harysen in original Japanese language versions) is one of the 493 fictional species of Pokémon from the Pokémon Franchise – a series of video games, anime, manga, books, trading cards and other media created by Satoshi Tajiri.

It is largely similar to its evolutionary predecessor Scyther, but has developed a thick, metallic outer exoskeleton and crab-like claws. As such, it is tougher and stronger than Scyther, but has lost its predecessor's blinding speed and ability to fly. Instead, because of the insulating effect of its thick, metalline shell, it spreads its wings to cool off, and flaps them very rapidly to heat up, or to blow air to cool itself off. Its demeanor changes, as well. While Scyther is a mantis-like predator, striking fast and simply evading potential pursuers, Scizor is more crab-like, with a conservative, defensive demeanor, in keeping with its greater defensive ability and lesser speed. It wards off attacks by waving around its eye-spotted claws, making it appear larger and more fearsome than it actually is. Once it engages its foe, either in the wild or at the direction of a Pokémon trainer in a Pokémon battle, it begins to more closely resemble Scyther. It strikes quickly with its powerful claws, raking more than pinching, relying on its startling agility to evade attacks. Attacks like HyperBeam also come out of its claws instead of its mouth (of lack there of) like most Pokémon. In the games Pokémon Diamond and Pearl, it was revealed that a female Scizor has a larger abdomen than the male.

In the Pokémon video games, It doesn't appear as a Pokémon in the wild in any of the games; it can only be evolved from Scyther, by trading it to another player with an item called "Metal Coat" attached. (It shares this attribute with Onix and Steelix.) Scizor is a somewhat unique evolution, because although its attack and defense are higher than that of Scyther, its loss of speed perfectly offsets those gains, meaning Scizor has no overall stat gain from evolution, though the pros outweigh the cons.

Scizor has become more viable in the 4th Generation, as it lacked a decent Bug Type move (the only ones being Silver Wind and Fury Cutter). It now can learn powerful moves, such as Iron Head and X-Scissors.

Scizor makes a cameo appearance in Super Smash Bros. Melee, as one of the Pokémon that can pop out of a Poké Ball. The Scizor pops out of a Poké Ball, says its name (as a warning), and prepares to KO the nearest enemy using Fury Cutter. This is similar to the effect of a Hitmonlee appearing in the original Nintendo 64 game. This Scizor is voiced by Shinichiro Miki. It is also an unlockable trophy.

In Pokémon Stadium 2, if a transfer pak has a game with Scizor in it, he can be used in the minigame Clear Cut Challenge along with Pinsir and Scyther.

Scizor has only made a handful of appearances in the Pokémon anime. Its first appearance was in episode 140, Wired for Battle, as one of the Pokémon of "Mr. Muromasa" (an obvious allusion to the Muramasa school of swordsmiths from Japanese history) named Masamune. In this same episode, Ash defeats one of Mr. Muromasa's students, a statistic-obsessed boy named Shingo who also has a Scizor named Blade.

Scizor makes a handful of other appearances in the anime. In the movie Pokémon 4Ever, a Scizor belongs to the villain, The Iron Mask Marauder.

Also, while in a Pokémon Contest, when Jesse got her hair tangled with Cacnea, a Scizor was called in to "operate" or cut her hair off.

In "Curbing The Crimson Tide," a Scizor belongs to Luna, a lonely millionaire's daughter. She uses a cloak and a neck device (with camera lens and speaker) to have Scizor pass off as Red Lightning who defeats the city's Pokémon and leave his mark on his defeated opponents. When Ash and Co. discover this, they followed Red Lightning to Luna's house and discovered her secret. Her Scizor can move in the wind like no other Scizor can (This is due to the fact that the high buildings of the city created numerous updrafts, which Scizor floated on as it jumped).

In the Pokémon Special manga, Scizor is first seen in Volume 9 under the control of Green, having evolved from his Scyther prior to the events of the volume. He brings it on his journey to the Sevii Islands. 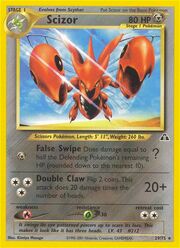 Scizor has appeared as a stage-1 Steel-type in all the following expansion sets:

In addition, Scizor also appeared as the 33rd promotional card, as well as another card named Dark Scizor (a Basic Pokémon) in the theme of Pokémon 4Ever.

Rocket’s Scizor EX evolves out of Rocket’s Scyther EX (both in the same set), making it the first EX Pokémon to evolve out of another EX Pokémon.

Scizor EX is currently part of the popular deck design named "SMP," an acronym for "Scizor (ex), Metagross (EX Deoxys version), and Pidgeot (EX Firered & Leafgreen version)", a deck that features the above three cards in a specific effective fashion.