From Codex Gamicus
(Redirected from Scrin)
Jump to: navigation, search

The Scrin are the alien third faction of Command & Conquer 3: Tiberium Wars. The unit concepts for this faction are based on trilobytes, mantarays, and insects. The Scrin first appeared in the game Command & Conquer: Renegade. The Scrin later had a ship which was hidden by Kane at the Sarajevo Temple. The Scrin ship provided the Brotherhood of Nod with technology to create the Banshee fighter in the Second Tiberium war.

Scrin units run on Tiberium radiation which is given off through a control node. The Scrin are all biologically immune to the debilitating effects of Tiberium. They have mainly plasma-based weaponry and warping technology. They view Tiberium as a resource and have ways to use it by increasing its growth rate, and using it as a weapon in their units. The Scrin are also able to control and generate ion storms, and they use these to attack specific targets.

Multiple Scrin ships have crashed on the planet earth. Captin Nick "Havoc" Parker witnessed that Nod had secured a small Scrin ship near their temple in Sarajevo. Inside this ship were volt auto rifles. Signs of the Scrin were also shown on a artifact in the museum below the temple of Nod.

In the second tiberium war a Scrin ship crashed in North America. Investigation of this crash found an item called the Tacitus which held information about tiberium and also provided the Brotherhood of Nod with plasma-based weapon technology, which they equipped on their banshee fighters. The Tacitus showed Nod information on ascension through the tiberium tower that was to be constructed when the Scrin arrived on Earth.

In the Third Tiberium war GDI's Ion cannon activated a liquid tiberium bomb which caused massive casualties on earth. The Scrin overlord sent Forman 371 to investigate and harvest tiberium on Earth, but the scout ship was fired on by GDI's Ion cannons, leaving droneships to land on Earth.

In their invasion of Earth the Scrin were seen to have plasma-based weapons and warping technology to allow quick travel around the map. The Scrin started to build a series of nineteen assembler towers around the world, which were being destroyed by GDI. Only one of the towers was finished and used to travel back to their planet. The overlord then asked the population to prepare an invasion towards Earth using the tower. 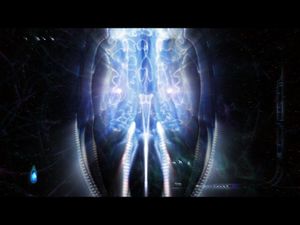 The Scrin Overlord is in charge of harvesting operations of Ichor (Tiberium) and is responsible for sending ships to invade planet Earth. Due to the abundant amounts of tiberium on Earth, he decides to test the indigenous species, and is defeated by GDI resistance. The overlord noticed their nineteen Assembler towers were being destroyed; they decide to finish one for evacuation back to their planet. The Scrin mentioned that the tower could be reactivated for further investigation of the area. The Overlord seems to be interested in Kane and requested Forman 371 to prepare an attack force to invade Earth.