Seadra's name is simply a shortening of "Sea Dragon", although there is a speculation it may have derived from Hydra, a mythic creature.

Seadra bears an exaggerated resemblance to the real life Sea Horse, but with a bold blue body, a yellow belly, and spiky fins large enough to be considered more like wings. In ancient Japanese legends, Sea horses were believed to be baby dragons by some groups of people, hence the name influence of 'Sea Dragon' and its species type. It also contains a genetic allele which is not present in Horsea - this oddity has been examined by scientists but there is no known explanation.

Seadra is capable of swimming backwards by rapidly flapping its wing-like pectoral fins and stout tail. Touching its back fin causes numbness. Its fin-tips leak poison, but its fins and bones are highly valued as ingredients in herbal medicine.

A Seadra will hook its tail around coral to stay in place while sleeping. Those trying to harvest coral are occasionally stung by the poison barbs if they fail to notice it. This can cause fainting.

The male of the species raises the young. If approached, it will use toxic spikes to fend off the intruder.

Seadra is present in every version of Pokémon, within all three current generations, and in most cases can even be found wild. Otherwise, it is always available for evolution from Horsea at level 32. After this, it no longer evolves by leveling up, but by giving Seadra a Dragon Scale and trading it, its final evolution Kingdra will appear in Seadra’s place.

Though Seadra has high numbers in its Defense, Special Attack, and Speed stats, it is almost never used in competitive play because of its extremely low Special Defense and low HP stats. Even in RBY, before Seadra was capable of evolving into Kingdra, Seadra was rarely used due to its limited movepool and balanced but mediocre stats.

Seadra has had a number of anime appearances, though most were only cameos.

One was used against Ash's Kingler in the first round of the Indigo League. Another was owned by Cissy, a Gym Leader in the Orange Islands.

A few Seadras appear in the ninth movie.

In chapter 43 of Pokémon Adventures, Yellow captures a Seadra. Another Seadra is owned by Silver who promptly trades it with Gold to get a Kingdra. 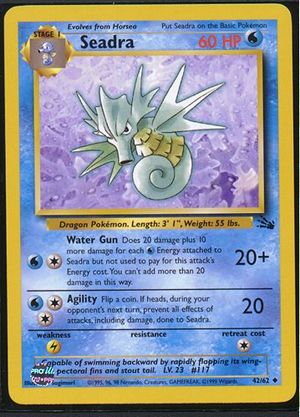 Seadra has appeared on numerous trading cards, usually as an uncommon water Pokémon. These are in Fossil, Neo Genesis, Legendary, Aquapolis, EX Dragon (twice), EX Team Rocket Returns, EX Holon Phantoms (as a Fire-type), and EX Dragon Frontiers (twice, both as Fighting-types; one rare, one uncommon). Additionally, in the Gym Heroes set, Misty's Seadra is a Rare Holographic card.