Seaking (アズマオウ, Azumaō, Azumao in original Japanese language versions) are one of the 493 fictional species of Pokémon creatures from the multi-billion-dollar Pokémon media franchise—a collection of video games, anime, manga, books, trading cards, and other media created by Satoshi Tajiri.

The "sea" in Seaking's name refers to the fact that it is a water-inhabiting Pokémon. "King" is probably a reference to its unevolved form's name, Goldeen (a portmanteau of "gold" and "queen"). Hence, its name means "king of the sea." Its Japanese name refers to azumanishiki (東錦, azumanishiki) for one kind of "goldfish" and ō (王, ō) for "king". Seaking was originally called Neptune in the beta.

Seaking resembles a Calico fancy goldfish, and it is generally thought of as being a beautiful Pokémon.

When the autumn spawning season arrives, these Pokémon swim powerfully up rivers, creeks and waterfalls. They do this in large groups, turning the river a brilliant vermillion color. To attract a female Seaking, the males will woo them with courtship dances. During the spawning season, male Seaking have a more beautiful coloration.

Once the male Seaking finds a mate, he will carve a nest out of boulders in a stream using his thick horn. This nest is ideal for stopping its eggs from washing down stream.

Seaking are very parental Pokémon. They are very protective of their eggs. The male and female will take turns patrolling the nest and protecting the eggs. This guarding period can last several months.

Seaking is available by fishing in all the Pokémon RPGs. Seaking can be found by fishing in rivers, usually not seas or oceans. It can also be obtained by evolving Goldeen at level 33.

In Pokemon FireRed and LeafGreen, wild Seaking can be caught by fishing in the Safari Zone.

Seaking lacks any especially high stats. Its Attack stat is somewhat high. Its Special Defense and Hit Points are both average, while its Defense and Speed are rather low.

In Pokémon Red and Blue, Seaking is the only Pokémon that is capable of learning Waterfall. However, in all later games, the move is learnable via HM; meaning almost any Water-type Pokémon can learn it. Goldeen and Seaking, however, can still learn it naturally, making them one of the few Pokémon that can learn an HM move by leveling-up (others include Rayquaza and Salamence, who can both learn the HM Fly in level up).

Seaking has made various appearances in the Pokémon anime, usually with small roles or cameos. (Its most notable appearance was the episode Hook, Line and Stinker, in which a Seaking-catching competition very similar to the bug-catching competition took place. The winner was whoever caught the heaviest Seaking; in the episode a tie was broken with a battle between the Pokémon used by the trainers to catch these Seaking.)

Both Professor Oak and Ash Ketchum have owned Seaking in the past, though Ash released his only a short time after capturing it.

Juan also owns a Seaking, which was used in a Gym Battle against Ash. Juan's Seaking was able to block electrical attacks with Horn Drill and send them back at its opponent. 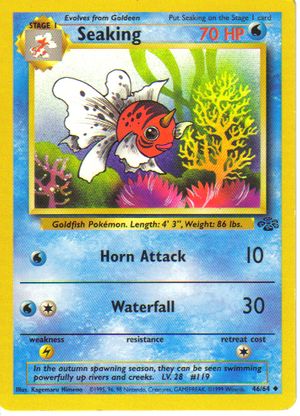