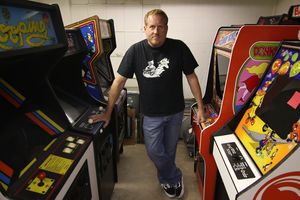 Blackley then went to work at Blue Sky Technologys, later called Looking Glass Studios. In addition to work there on Ultima Underworld and System Shock, Blackley helped to create the sophisticated physics system in Flight Unlimited.

He is mentioned in the Flight Unlimted manual as follows: "As far back as 1992, we started looking for new ways to fly on the PC. Seamus Blackley, a physics expert and experienced pilot, had just been hired on at Looking Glass Technologies, and he was well placed to see where the current simulators fell short of what they could be."

He was no longer working with the company when Flight Unlimited II was being developed. As a result, the second and third games did not have quite as sophisticated physics (though still arguably better than other games of the time), and the series became more civilian in nature.

After Looking Glass, Blackley worked at DreamWorks Interactive as Executive Producer of Trespasser, a physics-rich game published in 1998.

Seamus Blackley has collaborated with Bill Gates and creatively with Steven Spielberg.

In February 1999, Blackley joined Microsoft. Originally hired to work on DirectX, he wrote the initial Xbox proposal, assembled and lead the team that designed and built the device, and then evangelized the Xbox to game developers around the world.

Blackley has designed, programmed, produced and written music for videogames, and has, as the founding head of videogames division of CAA, closed many hundreds of millions of dollars in console, PC, mobile and cloud based videogame deals, representing nearly every famous working game developer on Earth.

He is currently president and founder of Innovative Leisure, Inc.