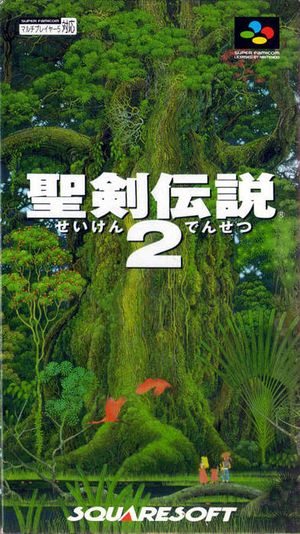 Secret of Mana for the Super NES was originally released by Squaresoft in Japan as Seiken Densetsu 2 (聖剣伝説, Holy Sword Legend). The game was the second installment of the Seiken Densetsu series; however, since the series began as a little-known Gameboy title called Final Fantasy Adventure, Secret of Mana was most Americans' introduction to the series.

Secret of Mana's gameplay is focused on battles fought in real time (that is, active hand-to-hand combat like that of the Legend of Zelda series) rather than the turn-based battle systems common in the Final Fantasy or Dragon Quest series. The fluidity of the battles is aided by a ring menu system, which allows the player to switch weapons, cast magical spells and also configure the battle behavior of the secondary characters, amongst other functions.

The game also features a weapon forging and improvement system - which would later be more extensively developed on Legend of Mana, the fourth game from the Seiken Densetsu series.

Secret of Mana can be played simultaneously by one, two or three players. In order to support three players, a Super Multitap accessory must be plugged into the second controller port of the gaming console. Otherwise, the game's artificial intelligence will exercise limited control over the one or two supporting characters. Notoriously, the AI is known for having a weak path-finding system, which might result in supporting characters getting stuck constantly. It is possible to adjust the aggression level of each AI-controlled character, but spell-casting must be performed manually.

The protagonists of Secret of Mana are the fighter Randi, the girl Purim (who tends to use curative/support magic) and a sprite child named Popoie (who uses aggressive magic). Popoie's gender remains undetermined due to references in the game's script of "he" and "it." The main playable characters were given default names in the Japanese release, but no default names were given in the North American or European releases. The three heroes quest to save the Mana Tree, a theme that pairs ecology with spirituality.