Secret of the Stars

Secret of the Stars (named Aqutallion in Japan) was a 2D RPG released in 1993 and developed and published by Tecmo for the Super NES. 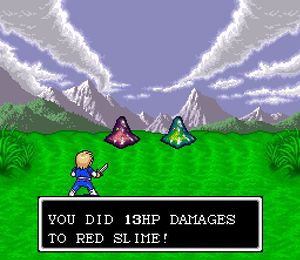 The battle system follows the traditional JRPG battle system where the party trades blows with opponents in simple turn-based fashion, the player selecting all commands for the following round of combat and then watching the results, such as in the Dragon Quest games. Gameplay switches between two parties throughout the game and certain areas are inaccessible without the right party.

The main character Ray and his party of Aqutallion warriors quest to find and destroy Homncruse, the evil power threatening their world. Ray begins his journey alone on a tiny island, but eventually he meets his friends and fellow Aqutallion warriors: Tina, Cody, Leona and Dan, and even creates a town for the victims of Homncruse's evil to live. Villains encountered along tend to range from comical, such as Cat Boo and Badbad with his lackeys the Badmen, to the elite generals of evil of Homncruse: Dram, Booth, Gara, and Godem.

Initially all the teens are considered Pennon, the lowest rank of warrior. Before they can destroy Homncruse each of them must undergo a trial at their respective temples hidden around the world to receive the secondary powers of Banalet. Dan is an exception because he is the descendant of the prosperous Wise Man clan of Aqutallion. When Ray, Tina, Cody, and Leona achieve the status of Banalet and are united by the powers of Dan, Aqutallion is reborn and the group gains incredible powers.

The Aqutallions are not alone: eleven members of Kustera can be recruited to fight for the young warriors in their place for a time being. The Kustera are mostly meant to serve as a supplement to the Aqutallions, but their role in the story is vital to its progression. From the same temples where the Aqutallions gain their Banalet status, there is a Kustera only warp icon that sends the group to a dungeon where great treasures are hidden.

A prototype of the U.S. version of Secret of the Stars has a slightly different title screen and has frequent gameplay glitches that make it unplayable.

The game was panned by many critics and gamers. One major complaint was about the separation of Aqutallion and Kustera parties; others complained that the Kusteras were never fully used in the course of the game. In addition, being required to level up two parties exacerbated what they believed to be a system that required excessive leveling to advance the plot, and the relatively high amount of enemies that are needed for the player's party to gain levels. Even the story, graphics and gameplay were attacked by many, calling them poorly written, NES-like, and simplistic. Since then, Tecmo has not made any similar role-playing games.