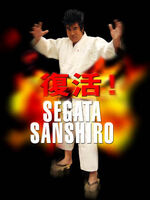 Segata Sanshiro was the spokesman for the Sega Saturn in Japan. He more-or-less single-handedly kept the Sega Saturn afloat until the birth of the Dreamcast. He also at one time moonlighted as a Kamen Rider; his Henshin feats inspired the masses to buy lots of sentai material. And he may've saved Tokyo once or twice. Truly, ahead of his time.

Segata Sanshiro was known mostly for his theme song and abilities that defied the laws of physics. A man in a karate gi, Sanshiro first appeared to a group of children going to play baseball. Angry at them for not playing Sonic R instead, Sanshiro proceeded to judo throw and chokehold them into submission.

He later repeated this act on an entire nightclub, for the sole purpose of forcing them into playing Shining Force 3 instead of dancing.

His next adventure dealt with his battling a fat man in a similar karate gi to his own. Sanshiro threw the man away after a short grapple, and the man exploded after landing on his head. This apparently was in some way related to Saturn Bomberman Fight!, if the little Bomberman plushie Sanshiro carries is any indication. Or Sanshiro simply willed him to.

At Christmas, Sanshiro masqueraded as Santa Claus to sneak into a house. The children inside were happy to see Santa, until Sanshiro ripped his mask off. The children were taken aback, but Segata Sanshiro forced a Saturn onto them. Good times were had by all. After the sobbing.

We soon were granted a glimpse into the training regiment of the great Sanshiro: He would run through a forest with a giant Saturn strapped to his back, attempt to judo flip a Saturn tied to a tree, and then practice machine gun punches on a giant Saturn controller. He then remembered his past accomplishments, and finished by doing jump kicks in a sea of flame. Truly, a master of his artform.

Many adventures were had by Sanshiro, which hopefully will be chronicled here over time.

In his final outting, Sanshiro protected Sega HQ from a villainous missile attack, sacrifacing his life by leaping onto the projectile, bracing his legs against the Sega building, and then leaping into space with it. The missile exploded, and Sanshiro died saving the company he loved.

To honor his achievements, Sega made a game for their hero, Segata Sanshiro Shinkenyugi.

Rumors have been heard to the effect of Segata Sanshiro appearing in the Japanese version of Virtua Fighter 4. This rumor has not, as of the time of this edit, been confirmed. More info is needed.