Sentret (オタチ, Sentret Otachi in original Japanese language versions) is a fictional character of the Pokémon franchise, and is one of the first Pokémon encountered in Pokémon Gold, Silver, and Crystal.

Sentret bears some resemblance to a flying squirrel, but with rabbitlike ears and a long, round tail. A very cautious Pokémon, it raises itself up onto its tail to get a better view of its surroundings. While standing on its tail, it can see a long way. If it spots an enemy, it will cry out loudly to warn its kind. It will also hit the ground with its tail.

A Sentret will only sleep when another one is standing guard. The Sentret will wake the others at the first sign of danger. Because of this, if one is separated from its pack, then it will be unable to sleep due to fear.

In the third generation, Sentret can only be found in the Sevii Islands of Pokémon FireRed and LeafGreen. It is found in Five Island Meadow, Water Path, and Canyon Entrance.

Sentret has very low statistics in all areas, including an abysmal Speed. It is generally ignored in competitive battling.

Sentret has had a number of Anime appearances, including a cameo in the third opening titles. Chaz, a Pokémon Coordinator has a Sentret that knows Iron Tail. He uses it for a demonstration when Pikachu learns the same move. Also, near the end of Pokémon: The Movie, when the stranded trainers are invited by Nurse Joy to stay at the Pokémon Center, a trainer walking near the back has a Sentret in his arms. A pair of sentret had a major role in "Tanks A Lot", when Togepi and one of the Sentret steal Team Rocket's latest weapon: The virtually unstoppable "Arbotank". The joyride is ended by Ash and Friends with the help of the other Sentret and Team Rocket. Sentret played a minor role in Lights, Camerupt, Action!, as a Pokémon Villager in the movie.

Sentret appears in chapters 92, 93 and 117 of Pokémon Adventures, which are in volumes 8 and 10. In the first two appearances, they are owned by Professor Elm, while in the third they are owned by a young girl at the Violet City Pokémon Academy. 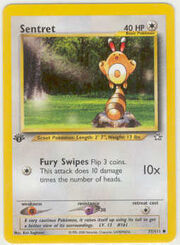 In the TCG, Sentret has appeared on four trading cards, always as a common, colourless card. They are in the Neo Genesis, Neo Discovery, Aquapolis and EX Team Rocket Returns sets.