Sexy Beach 3(Sexyビーチ3 in Japanese) is a 2006 sex and dating video game by Illusion for Microsoft Windows. It is the third game in the Sexy Beach series, following Sexy Beach 2. An expansion was released called Sexy Beach 3 Plus on December 15, 2006. 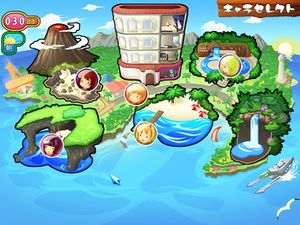 The map of the island with the characters

Sexy beach 3 is an open ended simulation game. You start at the Illusion Hotel Resort. In the hotel you are able to make a day pass, make a time of day pass or save your game. Once you are out of the hotel, you are able to date five female characters. On the left hand corner of the screen the game tracks the days you were on the island and the time of day it currently is.

When you first choose a character you start out with one heart on a heart counter. Each female character has her own heart counter. The more the player interacts and stays with the character, more hearts are available. Hearts also unlock various options and clothing. You can attain a maximum of five hearts. When the player attains a heart there is also a CGI image that is attained at the same time. The more hearts the player gets the more clothing and accessories are available. Also the female character is able to put on more kinky clothing as her heart counter gets higher. As the player goes further into the game he also gets the option of another type of lotion which prevents the girls from developing a tan. 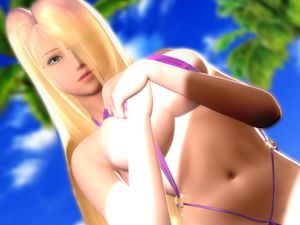 1 Heart: Player can watch the female character interact with the environment and change the type of clothing

2 Heart: The player can apply lotion to the female character.

5 Heart: The player can have sex anytime with the female character and gains the ability to have sex while standing. Also there are additional oral sex options.

The different environments the player can visit are a sandy beach, a hot spring, a waterfall, a grotto, and a swimming pool. The female character performs various activities such as swimming, jumping rope, reading, playing volleyball, standing around, and applying lotion. Some of the activities are determined by the location of where the player chooses to go. The sky of the environment also changes according to the time of day. When the player obtains three hearts he unlocks three rooms for the female character to enter within the hotel. They are the bedroom, living room, and the kitchen. In these areas the player is unable to apply lotion.

In the mode where the player can apply lotion, he can choose from various types of lotions to apply. The white color lotions can prevent tanning while brown color lotions can encourage tanning. The player will acquire stronger lotions when he advances in the game. Tan lines on a character is determined by what clothes she is or was wearing. To apply lotion the player simply can just squirt a massive amount of lotion in one area and he is finished. If the player has enough hearts, he can play with the characters breast and genital areas. If the player does not have the heart required for these activities the character will not allow the player to touch these area, but he can still touch the rest of the body.

In the love making mode, the player can penetrate the character in various positions depending on the level of hearts he is at. The player can also perform foreplay on the female character and the female character can also perform oral sex. There are different variations of oral sex between the different female characters. There are two bars for two characters engaged in sex. For the male there is a blue bar, which can be filled faster than the other bar by clicking down and moving the mouse in a circular motion. There is a pink bar on the side for the player's avatar and female characters orgasm similar to the one in Rapelay. The pink bar can be filled faster than the blue bar by just clicking down on the right corner location, when the bar reaches the half point line let go of the left click and wait for the characters to change position then click down again.

In the interface where you can adjust clothes, there are tabs which you can adjust the hairstyle, accessories, nail color, and clothes. The items in these categories can be gained by going out with different characters and having more hearts. In the clothes tab there are various tabs for different clothing such as swimsuits and bikinis. The character can wear all the types of clothing up to the ones with the amount of hearts on the player's counter. Unlike previous Illusion games, the clothing items come in sets. In the accessories tab the player is able to add headgear, wrist items, rings, earrings, glasses, and skirts to the character.

All the characters are from previous Illusion games, but their graphics were updated.

Bael is a woman with short blue hair and purple eyes who is from Des Blood 4. She manages the Illusion hotel resort. She is playable in Sexy Beach 3 Plus.

The protagonist from the game Des Blood 4. She is a blond female character with two bows on her hair.

Akagi is a brunette girl with two short pony tails. She is a character from Interact Play VR.

Maria is a blond female with long hair from Des Blood VR.

Eo is a blond female with short hair. She is also the main character in A-GA

Ayase is a brunette female nurse who appears in Biko 3.

During development, Illusion specifically chose characters from their roster of characters prior to 2006. They also took fan input into consideration on their website during the development phase.

Compared to the previous Illusion games, the graphics had improvements such as hair no longer clipping with the skin. The backgrounds also feature a lighting engine which renders water reflections and HD terrain. The game is in several layers and can be turned on or off by pressing the numbers 0-9.

Illusion added improvements from their camera in Rapelay. The camera starts by panning around the character, but can be stopped. You can also zoom in and out by using the arrow keys and move on a 2D Cartesian plane in front of the character with the right click. The left click allows you to rotate around the character. The camera also features several saved positions which can attained by pressing Q,W,E,R, and T.