Sexy Beach 3 Plus is an expansion to the 2006 sex/dating video game Sexy Beach 3. It adds two new characters and one secret character, and several new gameplay features. If the player has any current progress in Sexy Beach 3, it can be loaded into the expansion. 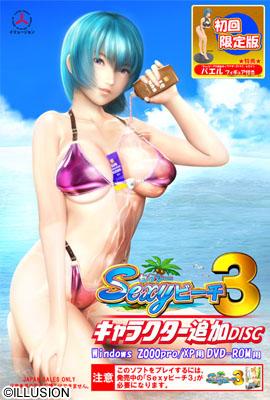 Illusion has added additional items to the in-game background scenes such as chairs and boats. These items are used to support the characters sexual positions. A set of sexual CGI image are added in its own CGI section.

Additional options were added to modify the character. When the player achieves four hearts he can change the characters hair color. At five hearts the player receives additional sex options in the position which use to only have oral sex. These options include mammary intercourse, the 69 position, and foot job. When applying lotion on five hearts, the female character has a bent over position. To achieve all sexual positions the player must continue to date the girl around 10-15 times after achieving five hearts, after which a message will be displayed that all positions have been unlocked, sex can be initiated anywhere at anytime, etc., and the girl will be "cleared". Also, the player will receive a sexual CGI Image.

Two whitening lotions have also been added. Also, more clothing have been added and the player is able to change the female character's eye pupil color.

Bael is a woman from Des Blood 4 with short, blue hair. She also manages the Illusions Hotel Resort.

Maya is a short energetic girl with a pigtail. She is from Interact Play VR, along with Manami Akagi.

Blue haired cat girl who cannot speak outside of saying "Myau". She is from Des Blood 4. Esk's companion, normally taking the form of a small blue cat-like creature, she appears in the game only after Esk Andersson has been "cleared". Only sex scenes can be initiated with Fei, and all of her character information will appear to be ?'s.