Shadow of the Colossus

Shadow of the Colossus is an action-adventure game developed by Team Ico. The game technically consists of nothing but sixteen boss fights (Colossi), which are scattered throughout a vast, realistically rendered land. The game is often credited for being unorthodox, innovative, and altogether artistic, sometimes called the Citizen Kane of video games. The game is also different in that there are no typical video game mechanics, such as levels, stats, new equipment, keys or dungeons. Everything you will use is available to you at the start of the game, providing a more realistic, immersive experience.

Compared to its predecessor, SotC was a more commercially successful game.

It was later officially confirmed that Shadow of the Colossus is a prequel to Ico.

Shadow of the Colossus is a game that consists entirely of boss fights. After defeating each Colossus, the player will be transported back to the Shrine of Worship, located in the center of the map, where Dormin gives a riddle describing the next Colossus to face. To locate the next Colossus, the player must raise their sword in the sunlight: the light from the sword will focus into a single beam when it faces the direction of the next Colossus. The land is vast, but not desolate. The terrain can vary, with long draw distances. Riding on horseback makes traveling faster, but Agro cannot climb or swim. There is also the occasional wildlife, such as turtles, lizards, and hawks. Some can be killed, but are not considered "enemies."

There is a pink circle meter which displays Wander's stamina, which is tied to his grip strength and ability to swim underwater. If this meter is run down, he cannot perform actions until the meter refills. The player can expand their stamina by collecting the tails of certain lizards. 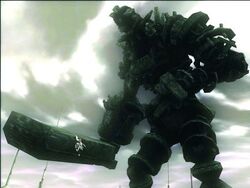 Wander fighting against the third Colossus

When Wander finds a Colossus, he must find its weak point, find a way to access it, and then stab it until it dies. The weak point can be found by shining the magic sword until it points to it. It is designated by a glowing mark. After a few stabs, the mark will disappear and move elsewhere. It is up to the player to find this new weak point to continue killing the Colossus.

Each Colossus is different. Some walk on two feet, some gallop on four, some fly. Almost all of them are complete giants. To kill them, they must be scaled. But not every part of their body has a grip. The player must often manipulate the movement and actions of the Colossus in order to reveal suitable climbing point. It may be as simple as waiting for the Colossus to strike with its club, so that the player may climb the weapon. Other times, the player may hide in a small cave, causing the colossus to try and find you, possibly giving you a point of access.

Once on the colossus, players climb & jump their way to the weak point. This is made difficult by the limitations on grip, so the player must often find some level ground or platform on the Colossus to rest & regenerate his grip. A fall from high distances will damage Wander, which will eventually lead to his death. All the while, the Colossus will be trying to shake off Wander, making it hard for him to stay on, let alone stab the weak point.

According to legend, there exists a land which holds the power to resurrect the dead. While trespassing on this land is forbidden by his people, a young man named Wander journeys to the realm with his horse, Agro, in hopes of reviving a maiden named Mono, who was sacrificed for "having a cursed fate". Arriving at the Shrine of Worship in the center of the land, Wander encounters the mysterious entity Dormin, asking for it to return Mono's soul to her body. Dormin agrees to do so, on the condition that Wander destroys the sixteen idols within the shrine: to do, he must kill the idol's respective Colossus, all of which are scattered across the land. Despite Dormin's warning that doing so may come at a great cost to him, Wander agrees.

Every time a Colossus is killed, black tendrils emerge from its corpse and enter Wander, causing him to fall unconscious: he awakens in the Shrine of Worship just as the respective Colossus's idol shatters. The great cost Dormin warned against becomes increasingly clear, as Wander's appearance progressively deteriorates with each Colossus destroyed. While on their way to the final Colossus, the bridge Agro and Wander are crossing begins crumbling, and Agro barely manages to throw Wander to safety before she falls into the deep ravine below.

While Wander fights the final Colossus, men from his tribe (led by the shaman Lord Emon) arrive in the land in an attempt to stop him. They arrive in the Shrine in time to witness the destruction of the final idol. Wander arrives moments after, his visage now demonic in appearance (including a set of horns sprouting from his head). Scolding Wander for what he has done, Emon orders his men to kill him. However, when Wander falls, his body is consumed by Dormin, transforming his body into a gargantuan demonic shadow. It is revealed that the black tendrils were pieces of Dormin's essence, which had been placed in the Colossi by Emon's ancestors after fragmenting its essence. Emon and his men flee the temple, but not before Emon casts Wander's sword into a small pool within the temple, creating a vortex of light that sucks Wander and Dormin in.

As Emon and his men flee the temple, the bridge connecting the realm to the outer world crumbles behind them, cutting the realm off permanently. Emon expresses his hope that Wander will be able to atone for his sins if he survived before departing. Meanwhile, Mono awakens in the shrine to see Agro limping into the temple, unharmed aside from an injured hind leg. Following Agro to the pool, Mono finds an infant with horns on its head. She takes the child with her, and makes her way with Agro to a secret garden at the top of the shrine.

Development on what would become Shadow of the Colossus began in 2002, at the time called "Nico" (a combination of Ico and "ni", the Japanese word for 2).

The game received critical acclaim: it holds a score of 91 on Metacritic based on 77 reviews from critics.

Shadow of the Colossus is considered one of the greatest games of all time, praised for its minimalism and unique approach to the action genre.

A remake was released for the PlayStation 4 in February 2018.