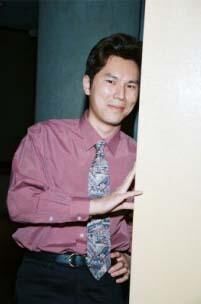 He's Hiding Something, I can sense it.

Shinji Mikami (三上真司, Mikami Shinji?, born August 11, 1965) is a Japanese video game designer best known for creating the survival horror series Resident Evil. He also contributed to some of Capcom's most popular post-32-bit era franchises, including Viewtiful Joe, Devil May Cry, and Ace Attorney, where he served as an executive producer.

Mikami graduated from the Faculty of Commerce at Doshisha University, where he majored in the study of merchandise.[1] He joined Capcom in 1990[1] and, soon after, created his first title there, a quiz game for the Game Boy titled Capcom Quiz: Hatena? no Daibōken, which took over three months to develop. His following three games were all based on Disney-licensed properties: Who Framed Roger Rabbit? for the Game Boy, and Aladdin and Goof Troop for the Super Nintendo.[1] Mikami also worked on an untitled F1 racing game that was canceled by the company after eight months of development.

After the release of Goof Troop, Mikami began development of a horror-themed adventure game for the PlayStation and Sega Saturn set in a haunted mansion, an idea loosely based on Sweet Home (an earlier Famicom game by Capcom based on the Japanese horror film of the same name). The resulting game became Biohazard, an action-adventure game which combined 3D polygonal characters and objects with prerendered backgrounds and featured zombies (among other monsters) heavily influenced by George A. Romero's Dead films. The game was retitled Resident Evil during its English localization under Capcom USA's suggestion and was released in Japan and North America on 22 March 1996 and became one of the PlayStation's first successful titles. It was the first game to be dubbed a survival horror, a term Capcom coined to promote the game.

After the success of Resident Evil, Mikami was promoted from planner to producer, becoming more involved in the business side of the company. As producer, he oversaw the development of the Resident Evil sequels (Resident Evil 2 and Resident Evil 3: Nemesis and also directed another survival horror title, Dino Crisis in 1999.)

Shortly after the release of Resident Evil 3 in Japan, Capcom Production Studio 4 was established in 1999. The studio's staff were mainly the key developers in the company's survival horror projects. Mikami was appointed as the general manager of the studio, and worked as executive producer for various games, including the original Devil May Cry (originally conceived as a Resident Evil game).

In the year 2000, Mikami became involved as producer of a new Resident Evil game. Resident Evil Code: Veronica. This game was designed from the ground up for the Dreamcast. Which is a much more powerful console than the PlayStation, the Dreamcast allowed the team behind the game to add for the first time, 3D environments instead of the usual pre-rendered backgrounds. Resident Evil Code: Veronica was released in the year 2000 and went on to sell 1,140,000 units. That same year, Mikami's Dino Crisis 2 was released, selling 1,190,000 copies worldwide.

In 2001, a special edition of Biohazard Code: Veronica was developed for the Dreamcast and also for Sony's brand new game console, PlayStation 2. This edition of the game was created to fill some plot holes, although it added other ones in the process. Regardless, Biohazard Code: Veronica Complete Edition, as the special edition was known in Japan, went on to outsell the original. In the States and elsewhere, it was known as Resident Evil Code: Veronica X. The PS2 version went on to sell 1,400,000 units, according to Capcom's sales data for March 2006.

In 2001, in what was to be one of his most controversial business decisions, Mikami formed an exclusivity agreement with Nintendo in which the main Resident Evil games would be sold only for the Nintendo GameCube. The GameCube would receive, in addition to ports of previous PlayStation and Sega Dreamcast installments, three new games in the series; a remake of the original Resident Evil, Resident Evil Zero and Resident Evil 4 (the deal did not include spinoff titles, such as the Gun Survivor and Outbreak games). Resident Evil and Resident Evil 0 were both released in 2002.

The remake of Resident Evil, was released in Japan on the sixth anniversary of the release of the original, March 22, 2002. The remake was billed as the definitive version of the game, selling 490,000 copies in the US and 360,000 copies in Europe. In total, Resident Evil managed to sell 1,250,000 units during its first year of release. The remake's sales data was made public by Capcom during its Financial Review Report for the year 2002.

In spite of Resident Evil Zero's underwhelming sales, Mikami remained confident in his support for Nintendo and announced four exclusive titles for the GameCube under development by Production Studio 4 in addition to Resident Evil 4; P.N.03, Viewtiful Joe, killer7 and Dead Phoenix. This lineup became known as the Capcom 5.

The first of these games to be released was the Mikami-directed P.N. 03. The game was both a commercial and critical failure, receiving lukewarm reviews from the press and selling below expectations. As a result, Mikami stepped down as manager of Production Studio 4, while remaining as one of the head producers within the team.

After his failure with P.N.03, Mikami decided to concentrate instead on the creative aspects of the Capcom 5. He eventually took over directorial duties for Resident Evil 4 from previous director, Hiroshi Shibata. Under his direction, Resident Evil 4 went through some substantial changes.

Resident Evil 4 was released in 2005 and was one of the GameCube's top-selling titles, selling 1,250,000 units worldwide within a year. The game was critically praised, winning many game of the year awards.

Shinji Mikami touted the game as a GameCube exclusive. In an interview with a Japanese magazine, Mikami even said that he would "commit harakiri" if it came out on another platform.[2] This was loosely translated as Mikami claiming to "cut [his own] head off" and later parodied in God Hand, which featured a racing dog named "Mikami's Head". Recently in an interview he gave apologies for Resident Evil 4 going multiplatform. He felt quite bad, believing some people bought a GameCube just to play Resident Evil 4 without knowing that it would finally be made available for PlayStation 2.[citation needed]

After the success of Resident Evil 4, Mikami left Studio 4 and was transferred over to Clover Studio in 2004. Originally established in July 2004, Clover Studio employed an all-star lineup of Capcom development talent, including Atsushi Inaba (producer of Steel Battalion and Viewtiful Joe), and Hideki Kamiya (Devil May Cry director).

At Clover, Mikami supervised the development of God Hand, a game in the beat 'em up genre that parodies American and Japanese pop culture. It was released in Japan on 14 September 2006, and on 10 October 2006 in North America. After the dissolution of Clover Studio in 2007, Mikami joined Seeds Inc, now known as Platinum Games, the newly formed successor of his former studio. Platinum Games is composed of several of Mikami's former Capcom colleagues including Hideki Kamiya, Atsushi Inaba, Yuta Kimura, Nao Ueda, Mari Shimazaki, and Masami Ueda. Mikami is currently working on Vanquish.

Mikami recently revealed that he formed a private development studio called Straight Story in 2006, shortly before the fall of Clover Studio. The name of the studio is taken from the 1999 David Lynch film. Their works will be under the Platinum Games branding and he is a contract employee ("external board member") of Platinum Games. He is also collaborating with Grasshopper Manufacture's Goichi Suda on Shadows of the Damned using the Unreal Engine 3.[3] Mikami revealed that Straight Story will close once development of Vanquish is completed. Straight Story will be replaced with Mikami's new studio, Tango, which has already been established.[4]

A teaser website opened on 18 March 2010 titled "Mikami Project" with a countdown attached. The website changed into a job employment page, for Mikami's new studio, "Tango".[5]