Shuckle (ツボツボ, Tsubotsubo in original Japanese language versions) is one of the 493 fictional species of Pokémon from the Pokémon Franchise – a series of video games, anime, manga, books, trading cards and other media created by Satoshi Tajiri.

Shuckle's name is derived from the words shuck, a husk, pod, or shell, with the suffix -le, possibly from the word turtle. Its Japanese name, Tsubotsubo, is a repetition of the word ツボ (tsubo), the Japanese for pot or jar, which refers to its rock/ceramic shell.

Shuckle's appearance resembles that of a scale insect. Its soft yellow body has four legs and is covered by a hard, vase-like red shell which has eight openings for Shuckle to stick its head and four appendages out of.

Shuckle is a diurnal Pokémon. It makes its home amid rocks, withdrawing into its rock-like shell and hiding among, under or within them. Shuckle employs a fluid secreted by its toes to dissolve rocks and carve them in a shape fit for its nest.

Shuckle's diet consists of berries, which it stores inside its shell to eat later. If stored long enough, the berries will eventually decompose and mix with Shuckle's natural fluids to form a viscous liquid that makes a healing beverage aptly called "berry juice".

While Shuckle's shell grants it unparalleled defense, it renders it very slow. Nothing else about Shuckle is terribly noteworthy either.

Occasionally, Shuckle use their natural liquids not just on rocks, but on opposing Pokémon. They are acids that can melt rock and even poison Pokémon too.

Shuckle first appears in Pokémon Gold and Silver and all primary games in the series following it. It is not capable of evolving. It is notable for having the highest defense and special defense of any Pokémon in the game. However, it also has the lowest Speed in the game, along with low Attack and Special Attack stats.

The Shuckle species was featured in episode #172 (A Better Pill To Swallow), in which an old man is making medicine using Shuckle. Apparently, Shuckle shells contain an enzyme which can give berries medicinal properties while turning into juice. In particular, a medicine made in the shell of a shiny Shuckle would give the drinker greater ability to raise Pokémon. Team Rocket find this rare Shuckle and, having eavesdropped on the legend, drink its juice. However, while it may have medicinal properties, raw Shiny Shuckle juice also have a pheromone side-effect—thousands of Shuckle and even Pikachu and Meowth are attracted to Team Rocket, but just before the stealing starts the Old man sprays the Pokémon with a powder which destroys the pheromone effect and leaving Team Rocket to be frazzled by Pikachu (as always).

In the Pokémon Special manga, Shuckle's major appearance is in Volume 23, under the control of Orm. Orm manages to use one Shuckle to control a huge swarm of Shuckle and hold Green down, but once Blue takes out the leader Shuckle, the entire group formation falls apart. 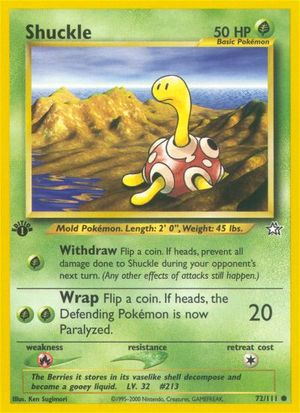 Shuckle is much less special in card format than it is in the video games. It has made 4 Basic appearances in the following sets: