Sin is a First-person shooter made by Ritual Entertainment on the Quake II engine. It was released in November, 1998. Many consider it to be a spiritual sequal to Duke Nukem 3D due to its interactivity and atmosphere. At release it was plagued with many bugs due to being rushed out to compete with Half-Life - including long load times and large save files. Despite this it was widely considered a great game, even rivalling the original Half-life when fully patched (Ironically, the next SiN game is being developed on Half-Life 2's Source engine) An expansion pack titled 'Wages of SiN' was created by 2015, the developers of the Medal of Honor series. An anime film was also created, however it did not follow the story of the game and instead told a different version, taking only a few elements of the game. 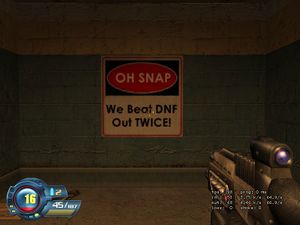