SimCity 3000 is a simulation game released in 1999, designed by Will Wright, developed by Maxis, and was Maxis' first title to be published under Electronic Arts after EA bought Maxis in 1997. A re-release under the name SimCity DS was published in 2007. Other versions include UK Edition and World Edition/Unlimited.

SimCity 3000 is more or less an upgrade to the big hit SimCity 2000. Rather than running the risk of alienating their fanbase, SimCity 3000 simply improved the graphics and other small gameplay elements, only adding a few new features here and there when deemed necessary.

Only a few totally new features were added: the need to manage the garbage a city makes, A news ticker (replacing the hilarious SC2K newspapers) to keep the player updated, the ability to add popular, A few items were also upgraded, like the water and power grids, a larger size of map, the graphical User Interface, and all of the actual graphics of the game. A common problem with SimCity 2000 was that in large cities, the number of style of buildings was generally not sufficient enough - whole blocks would look eerily similar. To combat this, Maxis added "props" that would change from building to building, allowing some slight variations to each building and reducing the obviousness of the problem. In addition, the old utility "SCURK" was replaced with the "BAT", the Building Architect Tool. Rather than requiring artistic talent like SCURK did, BAT allowed the user to build new building sets with a system very similar to Lego.

The game was still hugely similar, if for no other reason than it was a slightly nicer-looking version of SimCity 2000 with a few features added. The game however, signified the beginning of Maxis' rebirth after being purchased by EA, and was certainly a much better seller than many previous games. 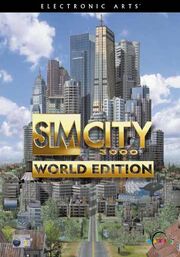 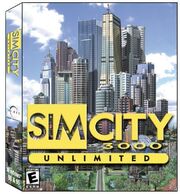 Shortly after the release of SC3K, SimCity 3000: Unlimited was released. This was a version to be released worldwide and was also known as the World Edition in some places. It includes more landmarks, but most of it is the same as the original. It also had some special holiday themes added where some buildings like the residential garden and some commercial buildings would change depending on the time of year. There is also a new Thanksgiving Parade, a Haunted House and Winter Wonderland reward. There is also a few new sound tracks to the game.

Another interesting feature is that buildings can be switched with custom-made ones or sets. The game comes with the default set (American), a European set, and an Asian set. There are also choices for the set of trees and terrain type.

Another notable difference of Unlimited is Scenarios. Players can choose to try and complete various scenarios. There are also a few tutorials for the player to learn from in the scenarios. 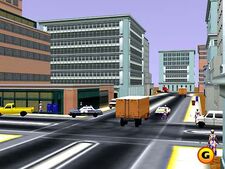 Old screenshot of SimCity 3000 in 3D (courtesy of GameSpot)

SimCity 3000, when it was initially being planned back in 1997 as a quick-fix for Maxis' financial woes, was to be entirely 3D. Despite the entire team's resistance to the idea (mostly because it wasn't even remotely feasible - Sim City 4 was not fully 3D, and still proved problematic to run on modest hardware at the time), the management at the time demanded it. When EA took over the company later that year, the new management realized the issues associated with an entirely 3D SimCity, and axed the idea.Template:CiteReq