Skiploom (ポポッコ, Popokko, Popocco in original Japanese language versions) is a fictional Pokémon character. It is a Stage 1 Grass/Flying-type Pokémon that evolves from Hoppip at level 18, and evolves into Jumpluff at level 27.

The flower on its head blossoms at 64 degrees Fahrenheit. As the temperature increases, the flower gradually opens further. This allows Skiploom to be used as a thermometer. It is capable of floating in the air, a skill it uses to get closer to the sun in order to better absorb the sunlight. When the sunlight is strong, its ability, Chlorophyll, increases its speed.

When it rains, the flower instantly closes and Skiploom hides under a tree to avoid getting wet.

Skiploom is a portmanteau of the verb skip, similar to Hoppip and Jumpluff, and bloom, referring to the flower on its head. Alternatively, the loom portion of the name might also refer to a weaving loom, in keeping with its cotton motif.

Skiploom is somewhat similar to its previous form, albeit larger, and Green. It has long dog-like ears, rather than the Cat-like ones of Hoppip. The leaves have turned into a large yellow flower. Judging how each stage is, Skiploom may be designed after the "Blooming" stage of a Dandelion, as its flower is oddly similar. Some fans compare it to Gloom.

Skiploom can be found in all three of Gold, Silver and Crystal. It is also available in Pokémon Colosseum. In Pokémon Gold and Silver, Skiploom can be found on Route 13 during the morning or day, but not at night. In Pokémon Colosseum, Skiploom can be found as a Shadow Pokémon in Pyrite Town. In Pokémon Ruby and Sapphire, and Pokémon Emerald, it must be traded in from Pokémon Colosseum, or it is not available otherwise, and in Pokémon FireRed and LeafGreen, Skiploom cannot be found in the wild, but can evolve from Hoppip at level 18. Hoppip is found on Five Island. Also it can be evolved from the Hoppip found in Pokémon XD Gale Of Darkness. Skiploom also appears near the end of Pokémon Mystery Dungeon. Skiploom is not generally employed competitively as it has mid to low range stats, its highest being Speed; many other Pokémon introduced during the Gold/Silver/Crystal had similar stat distribution. Also, it is difficult to train a Hoppip to evolve into a Skiploom as the only physical attack it learns before evolution is Tackle - a weak, basic move.

Skiploom first appeared in the Pokémon anime episode #180, "The Grass Route". Ash, Misty, and Brock encounter a Skiploom while travelling to Ecruteak City. This particular Skiploom belonged to the trainer Ephram. After a battle, Ash's Chikorita defeated Ephram's Skiploom. Ephram invites the group to his home, where they learn of a local tournament for Grass Pokémon. It turns out that Ephram had challenged Ash so as to practice for this tournament, which Ash also decides to enter, as does Team Rocket (in disguise) who had been lurking in the area. Ash's Bulbasaur and Ephram's Skiploom defeat the initial competition in the first rounds, and the final match has them facing off against each other. Skiploom ultimately prevails with its Solarbeam and Tackle attacks, defeating Ash and his Bulbasaur and winning the tournament for its trainer, Ephram.

In Volume 13, Erika is seen with a Skiploom. She uses it to fight Pryce and his Swinub, but falls easily due to the type disadvantage. 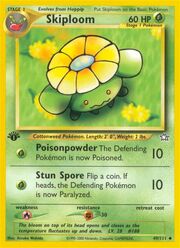 Skiploom appears in the following sets: