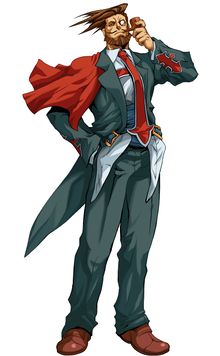 Slayer is a character in the Guilty Gear fighting game series, making his first appearance in Guilty Gear XX: The Midnight Carnival. He is a rather tall vampire, though unlike most vampires, he seems entirely unaffected by sunlight. He is apparently incredibly powerful, as he spends each entire round casually smoking his pipe; his instant kill attack is a spinning uppercut which if it hits, depicts a view of the galaxy, followed by Slayer saying a haiku, followed by his opponent 'flashing' for a moment as is sent into space, before panning back to the battlefield; and if defeated, he merely lies on the ground looking upset, sometimes saying the opponent's performance was "so-so", rather than being unconscious. He is also accompanied, largely, by his wife Sharon.