Slowbro is a large pink marine Pokémon that looks somewhat like a bipedal otter or hippopotamus with a permanently vacant facial expression and a huge conch shell latched onto its tail quite literally by its mouth.

Slowbro is an odd case of symbiosis; the giant conch on its tail is actually a former Shellder that bit onto the Pokémon’s tail while it was fishing as a Slowpoke and therefore underwent a sudden mutation as the Slowpoke evolved. When a Slowpoke dips its tail into a river or other body of water to fish, Shellder is among one of the possible sea Pokémon that can be tempted to bite it. For any other sea Pokémon, Slowpoke feasts on it; when a Shellder clamps onto its tail, however, a bizarre, unexplained phenomenon causes a mutual evolution to both entities to make them into more-or-less one creature, Slowbro. While Slowpoke’s body gains mass and its front side forms visible body patterns as it becomes Slowbro, the Shellder mutates from a relatively small bivalve clam creature to a much larger hermitcrab conch shell with two eyes and a big toothy mouth that is clamped onto Slowbro’s tail.

Slowbro’s lifestyle changes as a result of this unique evolution. First off, the mutated Shellder’s teeth consistently inject poisons into Slowbro’s body that prevent the Pokémon host from feeling pain, explaining why Slowbro never makes an attempt to shake off its Pokémon partner. This seems to be proven in Pokémon Stadium: when the player reduces Slowbro's HP to zero, it simply stands there and then looks towards the Shellder on its tail, as if asking for confirmation that it has indeed been defeated, which wriggles around as if attempting to communicate with Slowbro, who suddenly faints. The tail of Slowbro exudes an ooze-like substance that the Shellder finds delicious and therefore compels it to keep hanging on to Slowbro. The weight of the Shellder on its tail causes the rest of Slowbro’s body to face upward, rather than the quadrupedal nature of Slowpoke, and in turn the Slowbro has developed relative dexterity with its forequarters, able to punch an opponent upright. Although Slowbro can now better defend itself, the fact that its tail is used up by the Shellder means that it can no longer fish for Pokémon like it did as a Slowpoke. Instead, it must hunt by manually swimming in bodies of water, something Slowbro does begrudgingly. When it feasts on its prey, the Shellder consumes the left-over scraps as well.

In battle, Slowbro is able to use psychokinetic powers as well as physical punching action, but the Shellder continues to clamp onto the tail and is unable to do anything. The probability of this Shellder letting go of the tail is very low thanks to its strong grip, but in the event it is manually removed or thrown off violently during a Pokémon battle, Slowbro loses its mobility and its anatomy fully reverts to that of a regular Slowpoke.

Slowbro can be obtained by evolving a Slowpoke (at level 37). It appears in most games, though is not obtainable in Ruby and Sapphire, FireRed, Emerald, or the console games Pokémon XD and Pokémon Colosseum. It can be found in Pokémon LeafGreen on Seafoam Island (at B1, B2, B3 and B4), Cape Brink, Cerulean Cave (by surfing at 1F and B1), Berry Forest (by surfing) and Cinnabar Island (by fishing with a Super Rod). In Pokémon Red and Blue, it is found by fishing in Route 23, Seafoam Islands, or Cerulean Cave. In Pokémon Yellow, there is a low chance of appearance by surfing Routes 12 and 13, alongside availability in Seafoam Island. In Pokémon Gold and Silver, its only appearance is in Slowpoke Well. Curiously, although it is well known for its supposed evolution once a Shellder attaches itself to a Slowpoke's tail, no RPG game has yet allowed for this to happen.

In the game Pokémon Snap during the River Level, there is a Slowpoke along one side of the river. Luring it to a further spot with food will entice the Slowpoke to go fishing. You will see a Shellder bite its tail and in a bright flash of light, a Slowbro appears, with the opportunity for the player to take its picture.

In the RPG games, its cry is very similar to that of Machamp.

Slowbro appears many times in the Pokémon television series, most notably in the episode in which Jessie of Team Rocket caught a Shellder. In that episode Jessie's Shellder clamped a Slowpoke's tail and the two evolved into Slowbro.

Prima of the Elite Four also used a Slowbro to disable Ash's Charizard when he refuses to listen to return to his pokeball.

Another Slowbro also had a key appearance under the possession of Solidad, one of May's Pokémon Contest rivals who ultimately went on to win the Kanto Grand Festival.

Lorelei uses a Slowbro as part of her team in Pokémon Special. With the Shellder clamped onto its tail, Lorelei explains that her Slowbro has sharpened senses and is capable of looking in all directions, thanks to the extra pair of eyes, allowing it to discover Blue's ploy using Horsea. 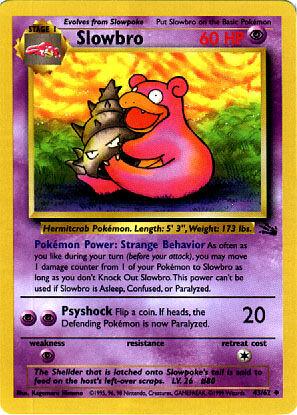 In the Pokémon Trading Card Game, Slowbro appears as a Stage 1 evolution card, and thus dependent upon having at least one Slowpoke in play to use Slowbro. It has made only five appearances in the many TCG sets, its first appearance as a Psychic type in the Fossil expansion. Like most of the set, Slowbro had a low amount of HP, at only 60. There, its saving grace was a unique ability which allowed a player to move a damage counter from one of their other Pokémon to Slowbro as long as it did not knock Slowbro out.

Slowbro's second Trading Card Game appearance was as Dark Slowbro in the Team Rocket expansion, with an unreliable attack, but a Pokémon Power which allowed a player to put cards from their discard pile into their hand once Slowbro was actively played. Again, Dark Slowbro had only 60 HP, but Slowbro's next appearance as Sabrina's Slowbro in Gym Heroes had 70 HP, and was able to heal itself in exchange for sleep. Slowbro appeared again several sets later in Neo Destiny as Light Slowbro, again a Psychic type, but had a special attack that allowed it to use Water Energy if there were no Psychic Energy on hand.

Slowbro's next appearance in Aquapolis was as a full fledged Water type, and with 80 HP and an attack with a maximum of 50 damage, and a Pokémon Power that made it an effective sponge in play. The EX FireRed and LeafGreen was a reprint of the original Slowbro, but Psyshock now does 30 damage as opposed to 20. Slowbro's most recent appearance was as a water type in EX Unseen Forces, with the ability to act as both a water and psychic type if any Psychic Energy are attached, and once again has an attack that manipulates damage, alongside Slowbro's current maximum HP of 80. However, its EX FireRed and LeafGreen card is considered the more useful of the two in the current format.