Slowking's name is simply a combination of the words "slow" and "king", because its related species Slowpoke and Slowbro look up to it as their leader (see below). Also, the Shellder on its head looks like a crown. Its Japanese name is like a combination of 宿借り yadokari (hermit crab) and king.

Slowking's appearance is essentially identical to that of Slowpoke (whose appearance might be based on the otter or the hippopotamus), with a few additions: it stands upright, it sports a red-and-white ruff around its neck and it has a bone-like structure on top of its head that is a cross between a helmet and a crown. This is actually a different form of Shellder, similar to the one biting Slowbro's tail. When Slowking is viewed from behind, the eyes of the Shellder can be seen.

Slowking is one of the two different species Slowpoke can evolve into, Slowbro being the other. Shellder plays a crucial role in the evolution of both forms. However, while in Slowbro's case the Shellder bites its tail, for Slowking the Shellder latches onto its head because it is wearing a King's Rock (also see below sections). This is what makes all the difference between Slowbro and Slowking.

The Shellder biting Slowking's head injects toxins inside its brain every time Slowking yawns. The poisons interact with Slowking's neural tissue to unlock mental faculties hitherto untapped, making Slowking considerably smarter and more alert than the sluggish Slowpoke or Slowbro. This makes it stand out among the aforementioned species, which recognize it as a leader of sorts. It is considered one of the smartest of all the Pokémon species, even capable of learning to understand and use human speech.

Slowking seems to have good leadership qualities. It always remains calm and keeps its wits about it, no matter how dire a situation might be. In untroubled times, Slowking focuses its intelligence on conducting research, trying to solve the mysteries of the world.

Just like Slowbro, Slowking's evolution is reversible; if for whatever reason the Shellder latched on its head happens to drop off, it will change back into a Slowpoke within seconds and, in the process, forgets all knowledge it has gained from its research. In packs the Slowking is the leader but due to its lust for knowledge in territorial battles it most likely coordinates the attacks and plan the strategies while the Slowpoke and Slowbro carry out the orders. But if it is cornered by the enemy it will defend itself with its powerful psychic powers.

Most of Slowking's statistics are above average, especially its Special Attack and Special Defense. Its physical Attack is average and its Speed is very low (thus the name Slowking.) Slowking can learn powerful attacks of both the Water and the Psychic type, as well as some useful disrupting moves like Yawn, Disable and Swagger.

Prior to being available in the games, Slowking played a prominent role in the second movie, The Power of One. He lived in the Orange Islands and was one of a very small number of Pokémon that can communicate in human language by articulating it- most talking Pokémon are Legendary and converse in "thought-speak". This Slowking was an expert on the local legends concerning Articuno, Zapdos, Moltres and Lugia, helping Ash and his friends restore the balance between them. The same Slowking appeared on a special episode that chronicled a typical day in his life.

Slowking was also featured in episode #262 (A Crowning Achievement), in which Slowking's evolution was showcased. A group of Slowpoke were around a Shellder-infested lake, at the middle of which laid a King's Rock. The Slowpoke that managed to dodge the Shellder and avoid evolving into Slowbro made it to the King's Rock and wore it on its head, whereupon a Shellder clamped on the Rock, triggering Slowpoke's evolution into Slowking. This was a ritualistic test to select the leader of the Slowpoke and Slowbro. Oddly enough, the Shellder only clamped on the King's Rock, although afterwards it is seen latched on Slowking's actual head.

Noteworthy, in the episode The Evolution Solution, a Slowpoke was included and a researcher who was studying the Slowpoke's reason for evolution, which was only Slowbro at the time. However, near the end of the episode a Shellder was thrown at Slowpoke, seconds away from biting its head before Slowpoke ducked. This might have been an allusion to Slowpoke's alternative evolution.

In the Pokémon Special manga, A hint of Slowking's existence first appeared in Volume 7, while Lorelei was musing on Slowbro's enhanced abilities after it had been bitten by Shellder. She remarked that Slowpoke would likely have improved abilities if it was bitten on its head.

However, Slowking's proper debut was in Volume 13, under the ownership of Charmaine. It was able to use its Snore attack to show that it could attack even when asleep.

Slowking appeared once more under the ownership of Lorelei in Volume 23. 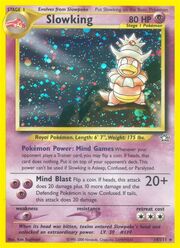 Slowking, a stage-1 Psychic-type Pokémon in all cases unless noted otherwise, has a healthy number of cards under its name:

Slowking was no longer allowed in tournaments as of Jan 1, 2003