The name Slowpoke is derived from the word "slowpoke", an insult directed at a lazy or sluggish person. "Slowpoke" could also be interpreted as a combination of slow and Pokémon (or poke, as in poking its tail into the water). In the beta versions of Red/Blue, Slowpoke was originally going to be called Slowmo (presumably short for "slow motion"). Its Japanese name is likely derived from 宿借り yadokari (hermit crab). Slowpoke is famous for being unbelievably slow at moving and thinking, and for having two separate evolution options.

They are moderately large, pink, quadrupedal animals vaguely reminiscent of a cartoonlike hippopotamus with bright pink flesh. Their vacant facial appearance and strikingly sluggish behavior have earned them the none-too-flattering Pokédex classification as the “Dopey Pokémon”, and they do not perform anything in their natural life cycle to counteract this popular image. Tradition holds that Slowpoke are able to bring nigh-immeasurable rain merely by yawning. Slowpoke can be thought of as yawning whenever they say their own name. This could act as a way for them to sharpen their senses (which yawning is supposed to do), though it obviously doesn't help.

Most of the time Slowpoke are seen standing in a daze and apparently lost in thought, though no one knows whatever they could be thinking about. Slowpoke are not necessarily sluggish by choice; their nervous systems appear to be unfit for reacting to an external stimuli in under five full seconds, even if that stimulus is a physical attack by another Pokémon such as a predator. And even when they do move and react, their alacrity is not impressive at all.

The primary activity of Slowpoke is to dip their apparently pain-resistant tails into rivers and use them as fishing rods when it is time to look for food. A Slowpoke's tail excretes a sweet sap-like substance on its end, which is appealing to fish for them to bite on the tail. Provided the fish wasn’t strong enough to literally bite the tail off (which is something that happens occasionally if Slowpoke catches a Carvanha), the Slowpoke lifts its tail back up and feeds on the fish. Even when fishing, a Slowpoke can forget its original purpose and remain on the same spot for days at a time, never noticing its catch, and suggesting that it is not vital for Slowpoke to consume food at a constant rate. Also, if its tail was bit off, it can regrow it much like how Staryu can regrow a missing limb. The easily regrowable nature of a Slowpoke’s tail, as well as its pleasant taste (though it lacks nutritional value), made it a popular enough delicacy that an underground Slowpoke tail trade flourished briefly among groups like the criminal Team Rocket, where items were often sold at astoundingly high prices.

The most perplexing quality of a Slowpoke is a slight transformational phenomenon that occurs when the Slowpoke comes into direct contact with a Shellder. Whenever a Shellder bites onto a Slowpoke’s tail while fishing in a river, which is a rather common occurrence, the body composition of both the Slowpoke and the Shellder change and reconfigure themselves so that one entity known as a Slowbro A similar transformation occurs when a Shellder clamps onto the head of a Slowpoke which is wearing a King's Rock, which is a much rarer occurrence, and a slight transmutation turns the two into a single Slowking. In both cases this can be reversed by removing the tightly clamped Shellder from the Slowpoke’s body, which will revert back into the body composition of a standard Slowpoke (this is not possible in any of the video games).

In Red, Blue, and Yellow, Slowpoke are found in Route 10, the Safari Zone, and Seafoam Islands. Slowpokes were useful in the original games, because they are able to learn three HM moves: Flash, Strength and Surf.

In Gold, Silver, and Crystal, Slowpokes are prominent in Slowpoke Well near Azalea Town and are protected by Kurt, the Poké Ball expert, against Team Rocket and other threats.

In Pokémon LeafGreen Slowpokes are much more abundant and can be found in many routes, the Safari Zone, the Seafoam Islands, the Unknown Dungeon, as well as most of the Sevii Islands.

In Pokémon Channel for Nintendo GameCube, Slowpoke hosts his own show, entitled Slowpoke's Weather Report. Like the Pokémon itself, the show's pace is very slow and it often takes hours for Slowpoke to find out what the weather in an area is and possibly change it.

Battling-wise, Slowpoke excels at the Hit Points department but has rather poor stats in other attributes, most notably Speed. Surprisingly enough, Slowpoke is not the Pokémon with the lowest Speed stat; that dubious honor belongs to Shuckle. While both of Slowpoke's types concern Special attacks, its Attack stat is higher than its Special attack one. Naturally this works against it, but with a good combination of Water, Psychic or strong physical attacks, Slowpoke has a chance. A move to consider is Curse, which raises Attack and Defense in exchange for Speed. Since Slowpoke is as slow as it gets anyway, the reduction of Speed is a small price to pay for the augmentation of attack and defense.

Slowpoke are also found in the Nintendo 64 game Pokémon Snap in the River Course. Contrary to the standard Pokémon RPGs, Slowpoke in this game evolve into Slowbro the way their Pokédex accounts describe them: if a Slowpoke is lured to the water’s edge and is tempted to dip its tail into the water, a Shellder will soon clamp on and both will evolve into a Slowbro.

In the standard Pokémon RPGs, Slowpoke's evolution does not rely on Shellder's presence.

Slowpoke is a Pokéfloat in Super Smash Bros. Melee. It initially has its tail curled towards its body but the tail lazily becomes straight and fighting moves there until Wooper appears.

Slowpoke is prominently featured in two episodes in the anime. The first one, #68 (The Evolution Solution), features a Slowpoke belonging to Pokémon researcher Professor Westwood V of the Seafoam Islands, which evolves into Slowbro thanks to Team Rocket agents Jessie, James and Meowth. Professor Westwood subsequently figures out the details of Slowpoke's evolution.

The second one #144 (A Shadow of a Drought) features the rainmaking Slowpokes of Azalea Town and Kurt. The townspeople become angry at Ash after he steps on a Slowpoke's tail.

In Volume 8 of Pokémon Special, a herd of Slowpoke has their tails cut off by Team Rocket, causing the Slowpoke Well to stop providing water. Gold proceeds to tire one out with his Aipom, prompting it to yawn and therefore cause the well to start flowing again. 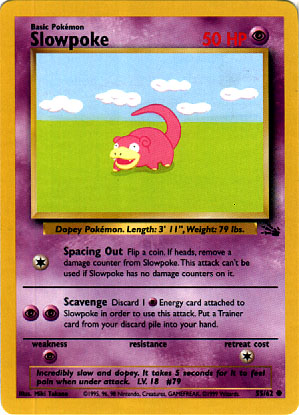