Slugma is a diurnal Pokémon that usually lives in areas of great heat (near hot springs or in volcanos), because it requires heat to live. It never sleeps. If it strays from a hot area, it must remain in constant motion, or its skin will harden. If this happens, the Pokémon will die of a slow death from starvation. Despite this, Slugma had the ability to harden at will for protection. If it stays near heated areas though, it may sleep as much as it want. It is assumed that slugma's skin won't harden if it stays in its Pokéball. Slugma is a diurnal Pokémon.

In Pokémon Fire Red and Leaf Green, Slugma can be caught in the underground chamber of Mt. Ember an area that is accessible only after the player has won the Pokémon League, caught or owned at least 60 different Pokémon, and upgraded the Pokédex to identify Pokémon that do not belong to Kanto. In Pokémon Colosseum, Slugma can be obtained by snagging it from Roller Boy Lon in Pyrite Town. As Slugma is diurnal, the chances of catching it in the daytime are much higher than at night.

Slugma has one of two abilities. Magma Armor prevents it from ever becoming frozen, and Flame Body means all attacks that are dealt directly (such as Doubleslap or Tackle) have a 30% chance of burning the attacking Pokémon. Additionally, in Pokémon Emerald, these abilities cause eggs carried along with a Slugma to hatch twice as fast.

Slugma evolves into Magcargo at level 38. Slugma's statistics are all very low, apart from a mediocre Special Attack. As a result, Magcargo is preferred in competitive battling.

In the Pokémon anime, a Slugma belongs to Flannery, the gym leader of Lavaridge City and specialist trainer of fire Pokémon. In episode #331, Poetry Commotion, Flannery's Slugma evolves into Magcargo.

During the Silver Conference, a trainer named Macey had a Slugma, although it was easily beaten. Eventually, the Slugma evolved into Magcargo.

A trio of Slugma first appeared in Volume 10. Professor Oak tried to capture them at the beginning of the volume, but failed. The Slugma later appeared outside Earl's Pokémon Academy at Violet City where they were captured by Crys.

Mack uses his Slugma to create illusions by generating waves of distorted air via heat, forcing targets to relive their worst memories. 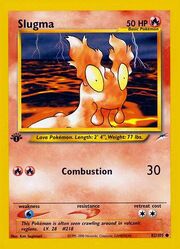 Slugma made appearances in the following expansions as a basic fire type Pokémon: