Smeargle (Doble in original Japanese language versions) is a Pokémon from the Pokémon franchise – a series of video games, anime, manga, books, trading cards and other media created by Satoshi Tajiri.

Smeargle looks like a bipedal beagle with a cranial structure resembling an artist's cap (or beret) and a long, possibly prehensile tail which ends in a tuft of fur similar to a paintbrush. The tuft is continuously soaked by a special colored fluid secreted from the tip of the Smeargle's tail.

The color of the fluid is predetermined and, one could assume, unique for every Smeargle. The Smeargle uses this hard-to-remove fluid as a pigment to mark the boundaries of its territory and print its footprints on the backs of its fellows once they reach maturity. The markings that Smeargle leaves around the boundaries of its territory have a consistent pattern of some sort to them, as in, they are not completely random; over 5000 distinctive marks have been found.

Smeargle is notable for its "Sketch" attack technique, which is unique to Smeargle. When used, it will replace itself permanently with the last attack technique used by an opponent Pokémon against Smeargle. It learns Sketch every ten levels. There are a few attacks Sketch cannot copy, but it can learn nearly every attack in the game, making it similar to Mew in that respect. It is one of the most versatile Pokémon as a result.

Due to its very wide movepool, Smeargle is also very useful for breeding Pokémon for Egg Moves (moves that can only be learned by breeding). This allows players to breed their own Pokémon with custom movesets without having to use TMs and allows the learning of otherwise unlearnable moves.

The Smeargle species was featured in the episode "The Art of Pokémon", where three of the painter Pokémon have gone out of control in Whitestone City, relentlessly graffitiing the spotless walls of its buildings while in search of inspiration. They were owned by an old painter named Jack Pollockson, an obvious reference to Jackson Pollock, a famous real-life abstract artist. Smeargle also made a minor appearance in Pichu Bros. in Party Panic on Pokémon Channel.

A single Smeargle once appeared on Pokémon Chronicles when an invisible Kecleon stole Meowth's lunch. Fortunately, a Smeargle was nearby and painted the Kecleon, making it visible.

Several Smeargle appear in the Battle Frontier's Artisan Cave in the Emerald saga of Pokémon Adventures. Knowing full-well of Smeargle's Sketch move, Noland takes the other Frontier Brains to Artisan Cave to find out if Jirachi had been there previously. Noland's hunch proves true; three Smeargle had Sketched Jirachi's glowing aura.

In the card game[edit | edit source]

Smeargle has appeared as a basic stage colorless type Pokémon in the following expansions:

The Promo Book Card was banned from professional tournaments due to Smeargle's Paint attack, which could change the Defending Pokémon's type. 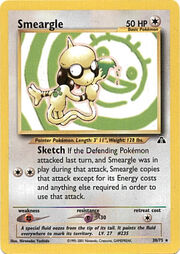