Sneasel(ニューラ, Nyūra?, Nyula in original Japanese language versions) are one of the 493 fictional species of Pokémon creatures from the multi-billion-dollar Pokémon media franchise – a collection of video games, anime, manga, books, trading cards and other media, created by Satoshi Tajiri.

Sneasel's name is derived from the translation of the original Japanese name. The Japanese name Nyula is a portmanteau of the Japanese words for sneaking in (潜入, sennyū) and weasel (鼬, yū).

Sneasel is a nocturnal Pokémon that lives in mountain forests. It hunts under the cover of chilly darkness, which allows it to sneak up on foes or lost prey. It has dangerously sharp claws, which it can conceal in its paws. It will suddenly unsheathe these claws in order to startle enemies and buy it time to attack. The claws are extremely durable, and are shed once a year to avoid wearing down. Many Sneasel have been seen standing at the peak of icy mountains when there is a Solar Eclipse, but why this is or how they know has not been explained. Sneasel is a deep blue-gray and has a golden jewel on its forehead and chest, and its claws are white. The purpose of these jewels is that they are the liquid nitrogen sacs (they have proper shielding) that allow sneasel to perform ice attacks. Sneasel's ears are completely different. While its right ear is small and dark blue-gray, its left one is big and red. Sneasel is may also based on Kamaitachi.

Like its real counterpart, the weasel, Sneasel includes eggs in its diet. It tends to seek out unguarded nests or to scare away bird Pokémon that inhabit them in order to steal and eat the nest's eggs. Even if the nest is located high up in a tree's branches, Sneasel can reach it by scaling the tree's trunk by punching it with its claws. Sneasels also prey on small Pokémon. It is revealed that Male Sneasel have a longer feather-like appendage on their left ear than females. Sneasel tends to live in small packs of five to six Pokémon, with different rankings similar to wolf packs.

In Diamond and Pearl, a female Sneasel has a smaller left ear.

Sneasel first appeared in the fourth Pokémon movie, Celebi: Voice of the Forest, as one of the three Shadow Pokémon used by the main villain (the other two being Scizor and Tyranitar).

Another one, in the episode "Pop Goes the Sneasel!" caused trouble for the Silver Conference of Johto when it blocked people access to the Sacred Fire of Ho-Oh, which was needed for the festivities (compare with Olympic Flame). It was captured by a trainer from Hoenn named Harrison and subsequently used in the Conference.

Sneasel was also one of the two featured Pokémon in the episode "Hail To the Chef!"

A female Sneasel also appeared in the Battle Frontier episode "Duels of the Jungle!" with its evolved form Weavile.

In the Pokémon Special manga, Sneasel's most predominant role is as one of Silver's Pokémon, presumably his first Pokémon as it was the Pokémon he used during his training under Pryce. 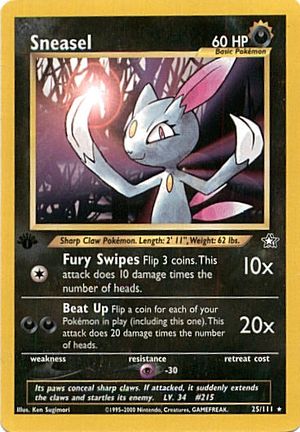 Sneasel has made 5 appearances in the card game, all as Basic Dark types:

In addition, a card named Rocket’s Sneasel was released in the theme of the fourth Pokémon movie.

The Neo Genesis version of Sneasel was banned from tournament play soon after it was released due to its incredible potential for power. Its Beat Up attack requires two Dark energy, and due to the cheap cost of the attack/the damage added by the Dark Energy card's effect, ends up doing twenty for each heads of a coin flip, and the number of coins flipped match the number of Pokémon on the user’s side of the field. That way, on six successful flips of a coin, Sneasel can do 120 damage in one turn, excluding the Darkness Energy Card's special effect. Sneasel was banned from tournament play before it ever reached America