Snorlax (カビゴン, Kabigon in original Japanese language versions) are one of the 493 fictional species of Pokémon creatures from the multi-billion-dollar Pokémon media franchise – a collection of video games, anime, manga, books, trading cards and other media created by Satoshi Tajiri. Snorlax is a portmanteau of Snore and relax.

Snorlax resemble a giant stuffed animal vaguely in the shape of a bear or a cat whose eyes always seem to be closed and head markings that resemble Pac-man. All Snorlax does all day is eat and sleep. Snorlax will eat just about anything, even moldy and rotten food. The digestive juices in Snorlax's stomach can dissolve any kind of poison. It is such a docile Pokémon that children use its large, expansive belly to jump on like a trampoline. Snorlax usually appears to be in a deep slumber, and can only be woken at will or by the poké-flute.

Snorlax make their home in grassy forested areas. Also, according to Brock and the original Pokédex entry, Snorlax normally live in mountains. In the anime, Snorlax has the ability to somehow greatly speed up the growth of vegetation in areas it has fed upon to the point that it regrows in minutes. This prevents other inhabitants of the area from starving after the Snorlax has fed. Snorlax is incredible heavy, weighing over 1,000 pounds, and for a time it was considered the heaviest species of Pokémon. It wasn't until the release of Ruby, Sapphire and Emerald that Groudon took its place as the heaviest species of Pokémon, along with many other species being found heavier than it.

Snorlax are found blocking Routes 12 and 16 in Pokémon Red, Blue, FireRed, LeafGreen, and Pokémon Yellow. In Pokémon Gold, Silver, and Crystal it is found in Vermilion City blocking the entrance to Diglett's Cave, which is the only way to access Pewter City, Viridian City, and Pallet Town. Snorlax is not available in Pokémon Ruby, Sapphire or Emerald, but it can be traded from Pokémon FireRed and LeafGreen. You can also snag it from Cipher Admin Ardos in Pokémon XD. In Pokémon Diamond and Pearl, players can breed Snorlax to get a Munchlax, but only while one of the parents is holding a Full Incense.

A Snorlax also appears in the Nintendo 64 game Pokémon Snap in the Beach Course. It will be obscured from sight, and it will momentarily raise its head when hit with a Pester Ball. When the Poke Flute is used, however, it will get up and dance, and a clear photograph can be taken.

Snorlax appear in Pokémon Ranger in which he plays much the same role as he does in all other handheld Pokémon RPGs. They sleep and block your path to certain areas, however, once certain tasks are met, they will simply vanish. This Pokémon is somewhat special in Pokémon Ranger, as it can only be awakened (making it capturable) once the player has captured all other Pokémon. After catching Snorlax, one will get a special cutscene and a badge showing you caught all the Pokémon.

In Pokémon Mystery Dungeon, Snorlax can be found in Howling Forest floors 11 to 14, and is unlikely to join the rescue team. Its friend area is Energetic Forest.

In Pokémon Diamond and Pearl if the player shows a girl in Pal Park a Snorlax they receive a Pokétch Application.

In the Super Smash Bros. series, Snorlax randomly pops out of Pokéballs that randomly appear, and crash through the stage. It knocks out characters that get in the way. In Super Smash Bros. Melee, Snorlax pops out of a Pokéball, stands a few seconds. Then it grows as it flies, and then it crashes through the stage, knocking out characters that get in its path (except for the person who threw the Pokéball).

Probably Snorlax's most dangerous action is rolling over. Because of its great size, and tendency to oversleep, anybody can end up being squashed underneath it for several days; such as Houndour in Pikachu and Pichu and Pichu Bros. in Party Panic or a Pokémon Anime episode where Ken and Mary (two members of the "Pokémon Mystery Club") discover some crop circles caused by a Snorlax, who then turns around and squashes them. At the end of one episode, even Team Rocket ended up being squashed by a Snorlax.

Ash caught a Snorlax of his own in the Orange Islands episode "Snack Attack", where the crew had to stop a Snorlax from eating all the Grapefruit from the Grapefruit Islands. Paired up with Jigglypuff's Sing attack to make him go to sleep again, this catch was easier than most. Ash sent him to the lab in Pallet Town later when he found it wouldn't wake up in time for his Orange League Championship battle, opting to instead use Tauros. He left it at the lab after that, as he couldn't afford to keep feeding him. Later on, Ash used Snorlax in a sumo wrestling contest. Snorlax's ample weight, mass, and "guts" caused him to easily win, usually through letting opponents ram him and get bounced off his massive belly. Snorlax was part of Ash's team in the Johto finals, defeating Gary's Arcanine and Nidoqueen, and then Harrison's Hypno and Steelix. Ash's Snorlax utilizes powerful attacks, much like how one would use Snorlax in the video games, such as Hyper Beam and Ice Punch. In both matches, Snorlax is ultimately defeated, losing to Gary's Scizor and Harrison's Houndoom. Snorlax later meets and gets to be friends with May's younger Munchlax. It next appears for Ash's match against Greta, Arena Captain of the Battle Arena, in which it defeats a Hariyama and a Medicham (both Fighting-types to which it has a defensive disadvantage).

Ash and his friends also encountered a Snorlax blocking the water in the river in the episode Wake up Snorlax. Ash and friends (and even Team Rocket) tried desperately to wake it up but failed, it wasn't until Ash looked into his Pokedex a third time to read about Snorlax and found out that the only way to wake him up and get him out of the way was by using a Pokéflute that an old man had. It was revealed that the old man who had the Pokéflute was in fact the Snorlax's owner, but when he awoke the Snorlax, it was revealed a thorn bush was the real source of the blockage and the newly awakened Snorlax devoured it all, its owner explaining that thorns are one of Snorlax's favorite meals. After that the river began flowing again and the Snorlax returned to sleep.

In Hoenn, Ash and company encounter a Snorlax terrorizing a banana garden full of Slakoth by eating up the bananas there and refusing to leave. Ash attempts to battle the Snorlax only to fall victim to its Yawn attack, which promptly puts everyone to sleep. Ash then calls Professor Oak for advice, and then puts together a plan with the garden owner to help one of the garden Slakoth to evolve into Vigoroth, whose innate Vital Spirit ability gave it immunity to Snorlax's Yawn. The owner then proceeded to battle and capture Snorlax who later was repurposed to run the relaxation room in the garden by putting visitors to sleep.

In the Pokémon Chronicles episode "Snorlax Snowman", there are white Snorlax in Arctic areas. As such, they are able to naturally learn powerful ice attacks. While they can be as troublesome as any other Snorlax, this ability comes in very handy.

In "Destiny Deoxys", a Munchlax is present for much of the film. At the end, it evolves into Snorlax.

Lucy, a Frontier Brain, owns a Snorlax of her own. However she does not battle with it, and apparently keeps it because of its sleepy eyes which she adores. Snorlax is voiced by Kevin Michael Richardson in Pokémon Battle Frontier. He makes many notable appearances in Pokémon Chronicles, mainly to flatten other Pokémon, including Houndour and Team Rocket`s Meowth. Snorlax also does this in the short "Camp Pikachu" (rolling over Pikachu and Raichu). The Pokémon Chronicles episode "Training Daze" featured a red Snorlax, which Jessie, James and Meowth, and Cassidy, Butch and Raticate were sent to steal in order to become official Team Rocket field agents, but the Snorlax turned out to be Viper, the Team Rocket Academy Drill Sergeant, in disguise.

Ash also has a Snorlax beanbag chair in his room at home.

Snorlax appeared in Pikachu's Rescue Adventure, the short feature which was shown along with Pokémon: the Movie 2000. Near the climax of the short, Pikachu and his friends struggle to protect Togepi and some Exeggcute from blowing away in a tempestuous storm. Snorlax lends a hand by anchoring the others. When the storm gets worse, Pikachu and his group form a long chain by holding onto each other, which Snorlax pulls back to safety.

Despite its inactive nature, Snorlax often appears on various Pokémon products, perhaps due to its cuteness. Some of the items featuring Snorlax include a "beanie" plush toy by Hasbro, a 7" tall Snorlax-shaped night-light, a tiny 3" plush figure which comes in a plastic Pokéball and a magnet from Polar Magnetics, packaged with similar magnets of Bulbasaur and Pidgeotto. 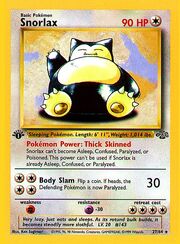 Snorlax, as seen in the Pokémon Trading Card Game

Jungle Snorlax was a popular tank card due to its high hit points, Basic class, and its Pokémon Power that practically made it immune to status effects.

Snorlax also appeared as the 49th promotional card and as a card named Greedy Snorlax.